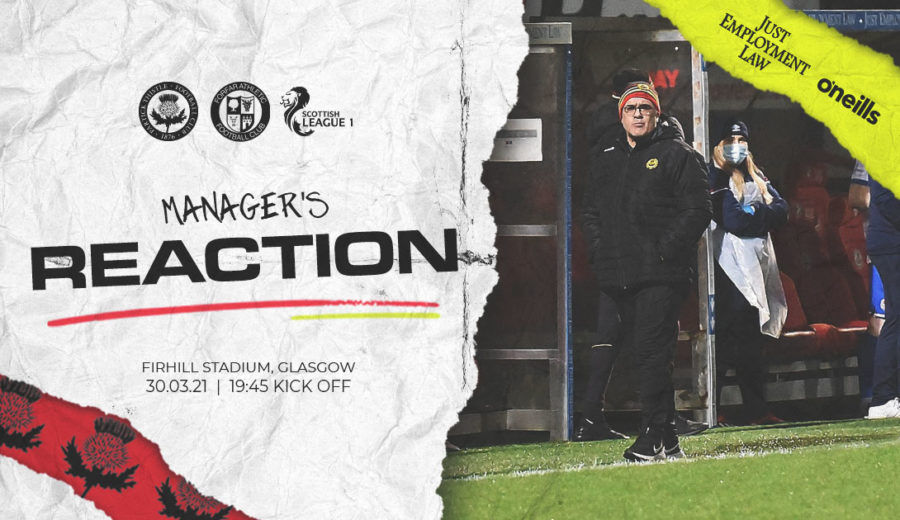 The points were shared this evening in Maryhill as Partick Thistle were held to a 2-2 draw by Forfar Athletic in League One action. The Jags fell behind early on when Scott Fenwick fired the Loons in front after less than two minutes though the hosts were able to pull level through Connor Murray just over ten minutes later. Forfar struck again a short time before half-time though with Scott Fenwick acting as Thistle’s tormentor once again. Thistle were able to restore parity for a second time with 66 minutes on the clock as Brian Graham turned Ryan Williamson’s cross into the net, however, that was the end of the scoring and it finished with honours even. Jags boss Ian McCall spoke to ptfc.co.uk following the final whistle:

“To be honest, we just weren’t good enough today and didn’t deserve to win the game. You’ve got to credit Forfar, they came out and caused us a lot of problems. It was a really open game, which went from end to end but we were inviting pressure onto ourselves and it was nowhere near what we expect from the players.”

“Two of our best players over the last few games picked up knocks at the weekend  and we felt it wasn’t worth risking them and potentially having them out for longer, especially with the tight run of fixtures between now and the end of the season. Zak Rudden and Ross MacIver did well last week against Cowdenbeath and that is a partnership we are keen to keep working on and improving to offer a different threat to our team. Ross Docherty needs minutes and there isn’t any other way to give them to him than throwing him into the team. The world we live in isn’t one where we can arrange two or three bounce games to bring him back up to speed.”

Forfar hit the front with just over a minute gone much like Airdrieonians at the weekend and McCall was left rueing the slow start again.

“We can’t allow this to become a habit because it does give us a lot of work to do. On Saturday, we were able to fight back and win convincingly in the end but if you keep conceding early goals then it is going to cost you and tonight we saw that.”

The Jags were able to get an equaliser but McCall was frustrated that his side didn’t push on and get another goal to go in front.

“It was a great goal from Connor and for a while after that we looked good and looked like maybe we could get another but then we fell back into the same problems we started the match with. We were giving the ball away too easily and that let them come onto us and eventually get that second goal which they probably deserved with how much time they were spending in our half at that point.”

The gaffer made three changes at half-time and two further alterations during the second period which he felt was a necessary move.

“We finished the first half looking quite laboured and I thought we needed to change things up. We brought Darren Brownlie, Brian Graham and Shea Gordon on to see if we could get that spark but we were still struggling to get our foot on the ball and then Scott Tiffoney and Chris Erskine came on, at which point I think we saw some improvement and got that second goal which put us in a decent position.

“Unfortunately, Chris picked up a hamstring injury with ten minutes to go and that meant were a man down for the end of the game. We still threw bodies forward and created a couple of chances but so did Forfar and it was actually quite open towards the end, they’ve hit the underside of the bar with a few minutes to go, but we couldn’t find that goal and it’s a really disappointing result.”

We’ll also have extended highlights and a full game replay of today’s match on JagZone at midnight – log in to view.