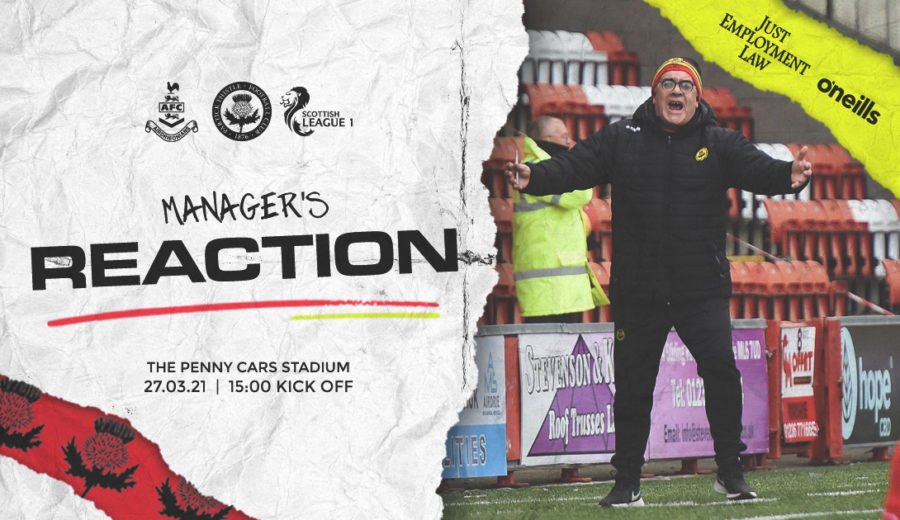 Partick Thistle got their first league win of the League One restart this afternoon in style as they ran out 4-2 winners against Airdrieonians. The Jags fell behind early on but were on level terms going into the break thanks to Scott Tiffoney’s first goal for the club in the 35th minute and then wasted little time after the interval as Brian Graham nodded us in front from Richard Foster’s cross. Connor Murray then made it 3-1 before Scott Tiffoney added a fourth and, even though Ally Roy pulled one back for the Diamonds, a comeback was always unlikely after Sean Crighton was sent off for a late challenge on Mouhamed Niang. Thistle boss Ian McCall caught up with ptfc.co.uk after the match to reflect on a successful afternoon:

“It’s a fantastic win for us. We were poor in the first half hour or so but our goal really kicked us into life. After that, we looked fantastic and should have scored more than we did. For that first period of the second half we were absolutely fantastic and in the end we fully deserved the win.”

Just before Thistle grabbed their equaliser they could very easily have been two down but an excellent Kieran Wright save kept the score at 1-0 and McCall was full for the on-loan ‘stopper.

“It was terrific save from Kieran and it was a massive moment in the match as it turned out. At that point we weren’t really at it and if they’d got that second then it would have been tough going, however, he makes that save and straight away we go up the other end and score and the whole game changes.”

Ian added Scott Tiffoney to the squad on Tuesday afternoon and in two games he’s already recorded an assist and two goals and the manager also paid tribute to his efforts in this afternoon’s victory.

“Scott’s been brilliant since we brought him in. We were very impressed with his performance on Tuesday and that’s what earned him a spot in the team today. His first goal shows the pace he’s got but also his quality because he uses a terrific first touch to get it under control and then does well with the finish. Then he got a well-deserved second from a great cross by Ryan Williamson and I think you can see how big a player he’s going to be for us.”

After going a goal up through Brian Graham early in the second half, the gaffer was delighted with the way his side went and added to that lead.

“Too many times this season we’ve been guilty of wasting chances and keeping things close as a result so today it was great to see us go and get that third and fourth goal to provide that cushion. You could see a confidence in the team as we went and scored the goals after half-time and although we definitely could have been more clinical, getting four goals is not a bad haul.”

The manager made a selection of changes towards the end of the game and says he was happy with how the Jags saw the game out.

“Look, they got a man sent off which made things a bit easier for us but overall we kept moving the ball and created more opportunities. I’ve spoken to the referee and he’s apologised regarding Brian’s second goal which was onside. Away from that, Zak had a couple of great chances which didn’t quite fall for him.”

The Maryhill men now look forward to a clash with Forfar at Firhill on Tuesday which McCall expects to be another tough contest.

“There’s no time to celebrate this because we need to make sure it isn’t a one-off. We’ve got Forfar in midweek and we have to be able to produce that second half performance again and hopefully over the full 90 this time. They’ll make things very difficult for us but we’re looking forward to it.”

Further reaction with Thistle gaffer Ian McCall and Kieran Wright will be available for JagZone subscribers to watch – log in to view.

We’ll also have extended highlights and a full game replay of today’s match on JagZone at midnight – log in to view.