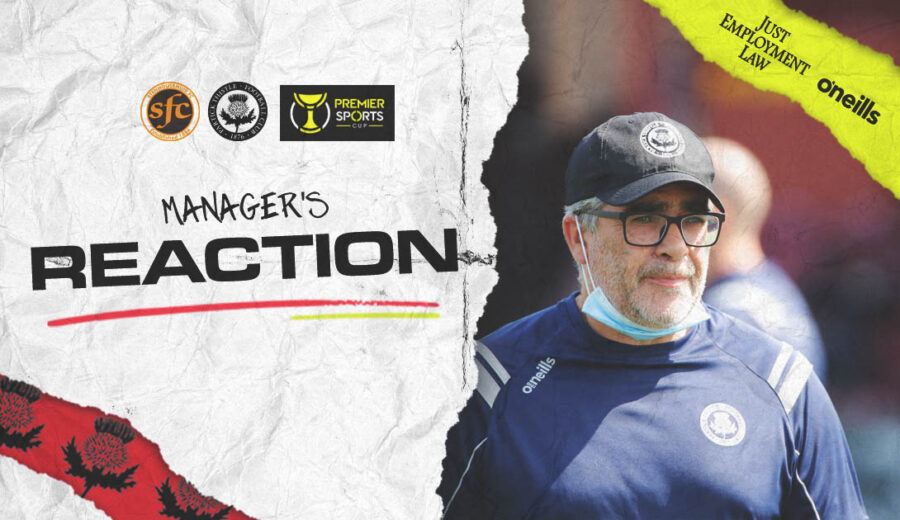 It was a first win of the 2021/22 competitive season this afternoon for Partick Thistle as they took all three points from a trip to Ochilview in the Premier Sports Cup. The Jags lost their season opener against Dunfermline last Saturday but bounced back with a victory over the Warriors this weekend despite trailing at half-time. Tam Orr put Stephen Swift’s side ahead with a first half penalty but goals from Zak Rudden and Brian Graham after the break proved decisive for the Maryhill men as they earned their first points of this year’s group stages. Jags boss Ian McCall spoke to ptfc.co.uk following the full-time whistle:

“It was a tough game against a good Stenhousemuir team who I think will do well in their league. Still, we were disappointed to be down at half-time but we made some changes and played a lot better in that second half. Ultimately, we were just pleased to get the win in the end.

“I thought we started well again and created a few decent opportunities but they always had that threat. They’ve got some dangerous attackers but still I felt for the most part we were pretty comfortable. From our perspective, we feel like we could have had more than two but two was enough which is the main thing.”

A few of the players who missed time during pre-season got more match minutes today and the gaffer thinks that will serve them well.

“Certain players really need this time on the pitch. Stuart Bannigan got 90 minutes today which will be big for him, Scott Tiffoney got a half, Zak Rudden got nearly 70 minutes and there are other guys too. Every game we play is moving us in the right direction in terms of that sharpness and fitness.”

Like against Dunfermline seven days prior, it was Rudden and Graham on the scoresheet for Thistle and McCall was pleased to see his frontmen finding the back of the net again.

“I felt we could have got the ball into them more in the first half particularly. We played it about well at times and had a lot of possession but you’ve got to use the strikers. We did it more as the game went on and that turned into the goals we got.

“I want to mention Ross MacIver as well who put in a really good shift when he came on too so I was pleased with what I saw from all three of the strikers today.”

It’s Dumbarton up next for the Jags with qualification still a possibility but the manager was still cautious about the chances of progression with two difficult games left to play.

“We’re focused on Tuesday night, if we can win that one then we’ve got a chance going to St. Mirren but it’ll be a tough match against Dumbarton. Hopefully we can carry a bit of confidence from today’s win into Tuesday and get a bit of momentum going.”