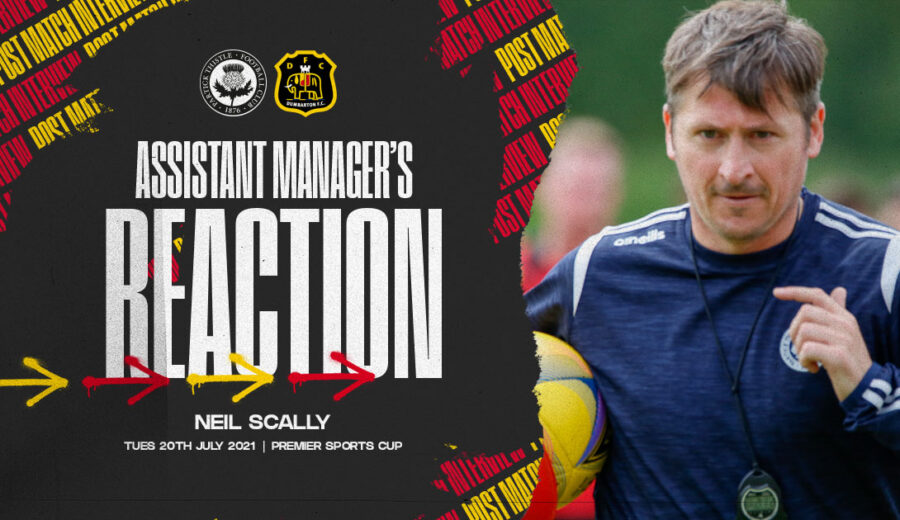 It was a second win in four days for Partick Thistle as they beat Dumbarton 2-0 at Firhill this evening. The Jags were following up Saturday’s win against Stenhousemuir at Ochilview looking to maintain hopes of Premier Sports Cup progression against a Sons side without a point to their name in the group stages. In the end it was Brian Graham who made the difference, finding the net either side of the half-time break, taking him up to four goals for the season in just his third game. Thistle assistant manager Neil Scally spoke to ptfc.co.uk following the victory:

“It wasn’t a performance that we were absolutely ecstatic about but the main thing was always to get the three points. We didn’t move the ball as quickly as we’d have liked and we gave it away a bit too easily at times but we got more minutes in the players’ legs and got the win so we were satisfied.”

Brian Graham was the man who got the goals for the Firhill side and Neil says the management team are really excited about the potential of Graham and Zak Rudden as a duo.

“It’s been great to see Brian and Zak scoring early in the season. You always want your strikers to be scoring of course and the earlier they get into that habit the better so both of them getting on the scoresheet in these cup matches can only be good for us.

“We’ve got high hopes for the pair of them because we think they could be one of the best striking partnerships in the league if not the best.”

Mouhamed Niang went off with an injury at half-time but Scally says that was a precautionary measure.

“Sena should be fine. We just have to be extra careful at the moment because we’ve got a fairly small squad. It’s no secret that we still want to add a couple of players but for the time being we just don’t want to aggravate any injuries unnecessarily.”

This evening’s was the Jags’ second competitive match with fans back at Firhill and Neil says it makes a world of difference for the players.

“It’s been huge because a lot of the games we played last season, especially early on, they just had the feel and atmosphere of a friendly. Obviously, the boys were doing whatever they could to get in the right mind-set for games but with fans back in that’s taken care of and we’re delighted to see the supporters back here at home in particular.”

Further reaction with Thistle assistant manager Neil Scally is available for JagZone subscribers to watch – log in to view.