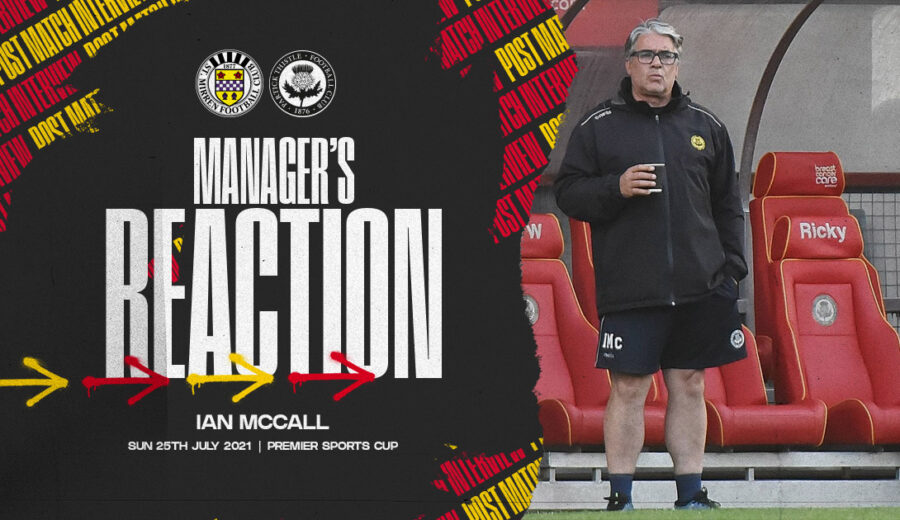 It was the end of the road in the Premier Sports Cup for Partick Thistle this afternoon as they fell to a 2-0 defeat by St. Mirren in Paisley. The Jags came into the game knowing they needed a three-goal win to progress to the last 16 but fell well short with the home side claiming the win to top the group and head through to the next round. Jamie McGrath opened the scoring with a penalty in the first half and Buddies captain Joe Shaughnessy sealed the win with an injury time goal at the end of the second sending the Jags out. Thistle manager Ian McCall spoke to ptfc.co.uk following the conclusion of the match:

“I thought it was really tight in the first half. We had a couple of good opportunities and who knows what happens if we score one of them but, to be fair to them, they had good chances of their own in the second half before they eventually got their second.

“In the end, it was immaterial whether we lost by one or two goals so we tried to go for it. We put bodies forward and made a couple of forward thinking subs but that left us a bit more open at the back and they capitalised on it for the second goal right at the end.”

Despite the end result, McCall still came away from the game with feeling encouraged by the team’s prospects for the season.

“Look, we’ve got some quality players here at the moment. The squad will be a bit fuller over the next couple of weeks with Scott Tiffoney and Cammy Smith coming into contention and then we’re still looking to add more new players soon so we’re looking forward to a big game next Saturday against Queen of the South.

“I felt we did miss Tiff’s pace today, that bit of something different that really can unsettle a defence and likewise with Cammy, he’s the sort of player that maybe could have found that killer pass we were missing today so we’ll look forward to having them available soon.”

The Jags now turn their attentions to the aforementioned league opener against Queen of the South at Firhill and Ian says the team know the importance of that game in the context of the season.

“Of course it’s always helpful to get a winning start to your season. The positions aren’t decided after one game but you want to get into that winning habit that we got into at the end of last season as early as possible so hopefully we can get off on the right foot for the league. We didn’t start well with the first group stage game but we feel the minutes we’ve got over these four matches should have us in a much better position going into that game next weekend.”

Further reaction with Thistle manager Ian McCall is available for JagZone subscribers to watch – log in to view.