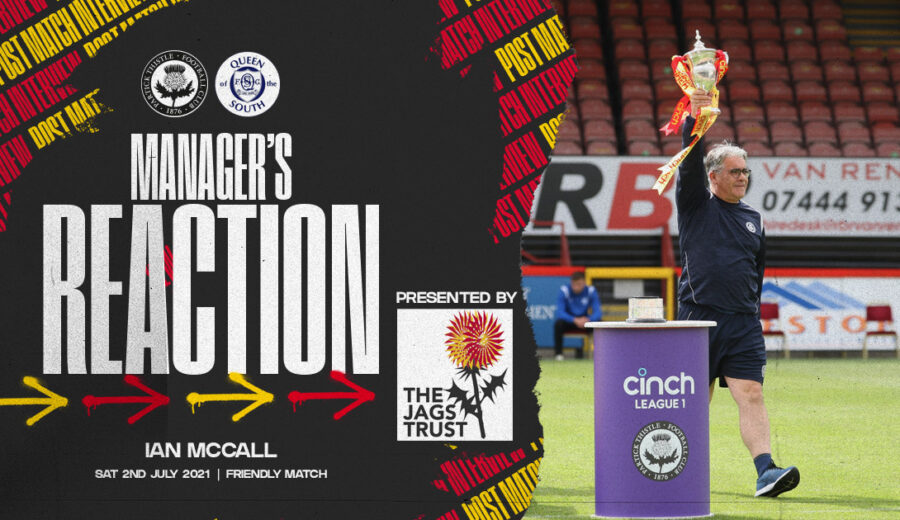 It was a winning start to the new cinch Championship season for Partick Thistle as they defeated Queen of the South this afternoon. The Jags fought back after conceding early on to head into the break 2-1 up courtesy of a Brian Graham brace. The visitors levelled things within the last 20 minutes through Ruari Paton, however, the Maryhill men were not to be denied as Scott Tiffoney struck late to secure a big three points for the hosts. Jags gaffer Ian McCall spoke to ptfc.co.uk after a rollercoaster of a game:

“I actually thought we were pretty poor today and Queens were better than us but it’s a great result for us. We’re still searching for the right shape and we’re still a couple of players light but Tiff comes on and does the business for us so we’re delighted.”

An early setback in the form of a Willie Gibson goal after 15 minutes had Thistle on the backfoot momentarily but McCall was pleased to see his side bounce back with character in a way he knows they can.

“This is a team who showed last season that they can come back when they get knocked down, I can’t question them in that regard. The guys who we’ve added have that in them too, for example Holt and Mayo both defended well in that second half. At the end of the day, we got the result although we feel there’s plenty of improvements to be made.”

The manager expanded on his feelings about the team’s performance, emphasising his high hopes for this group of players.

“We’ve got the ability to play better than we did today without a doubt but it’ll take a bit more time. As I’ve said, we’re still searching for the right formation for our players and hopefully we can find it soon. We’ve got a game next Saturday then we’ve got two weeks before the next match so that’ll give us a bit of time to work on different things with the team which will be useful for us.”

We welcomed over 2000 Thistle season ticket holders into the ground for today’s league opener and the manager says he thoroughly enjoyed having so many fans in supporting the team.

“It was a great day overall. Having the flag ceremony and so many supporters back in made for a great atmosphere but it almost felt like we were set up to fail but I’m very glad we were able to give the fans a win today.”

Finally, he paid specific tribute to Brian Graham and Zak Rudden who were central to Thistle’s two first half goals with the former scoring them both, taking his tally to six for the season.

“Zak was fantastic for us and he covered a huge amount of ground while he was on the pitch. We brought him off just to add a bit of freshness towards the end of the game but what he offered while he was on was invaluable with the two crosses for our goals and the way he stretched their defence.

“As for Brian, he gave absolutely everything out there. He’s in excellent form at the moment which is just a continuation of how he ended last season and long may it continue.”

Further reaction from Thistle manager Ian McCall and Brian Graham is available for JagZone subscribers to watch – log in to view.