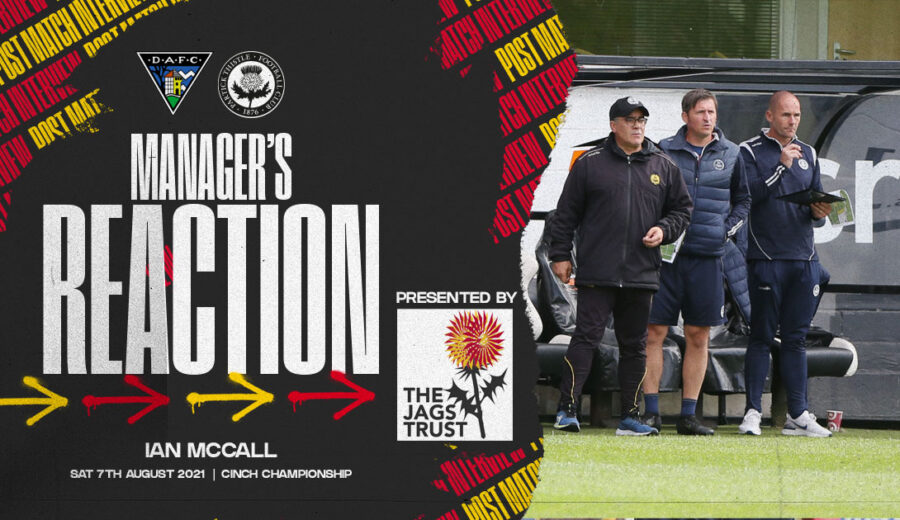 Partick Thistle made it two wins from two to start the league season for the first time in 8 years this afternoon as they won 3-0 at East End Park, adding to their opening day triumph over Queen of the South. Two first half corners bore fruit with Ross Docherty and Kevin Holt heading home to put the Jags in the driver’s seat at the interval before Ross Graham turned the ball into his own net from Cammy Smith’s cross to give the Maryhill men a three-goal advantage in the second half. Following the final whistle, Thistle boss Ian McCall spoke to ptfc.co.uk about the performance:

“We were fantastic across the board today and, to be honest, we could and should have scored more. We cut out the mistakes that we made when we last played them and looked comfortable for the majority of the game. It’s not an easy place to come but we were deserving winners.”

The gaffer had particular praise for Thistle’s central midfielders Ross Docherty and Stuart Bannigan who he felt stood out throughout the match.

“The pair of them were fantastic from start to finish. They controlled the game perfectly for us against a Dunfermline midfield that had a lot of quality and especially in that second half it just helped ease the pressure after they had a bright start coming out from half-time.”

Both the Jags’ first half goals came from corner kicks and the manager was delighted to see training ground work turn into goals on the park.

“Ross Docherty doesn’t get many but he took his really well this afternoon. I think people underestimate his aerial ability a bit and that run to the front post is something he does really well. To then go and get that second with Kevin Holt was great and seeing us take advantage of the number of set pieces we got was brilliant.”

Thistle managed to see the game out for their first league clean sheet and the manager said he was pleased with the way the side defended.

“It was a great effort from the boys today. As I mentioned, Dunfermline started the second half really well but, unlike the last time we played them, we limited the number of clear chances they got while they had a bit of momentum. Lewis Mayo was excellent and his pace is a real asset for us at the back.”

The team now have two weeks until their next match and Ian is keen to make sure they use this time wisely.

“It’ll give us an opportunity to work on some things with the boys in terms of formation because there are still things we want to improve. Also, there are some players like Cammy Smith and Scott Tiffoney who’ll benefit from that extra training without the game there. They both looked really sharp today but they still need some more time to get up to 100% and these two weeks should be ideal for that.”

Further reaction from Thistle manager Ian McCall and Ross Docherty will be available for JagZone subscribers to watch later – log in to view.