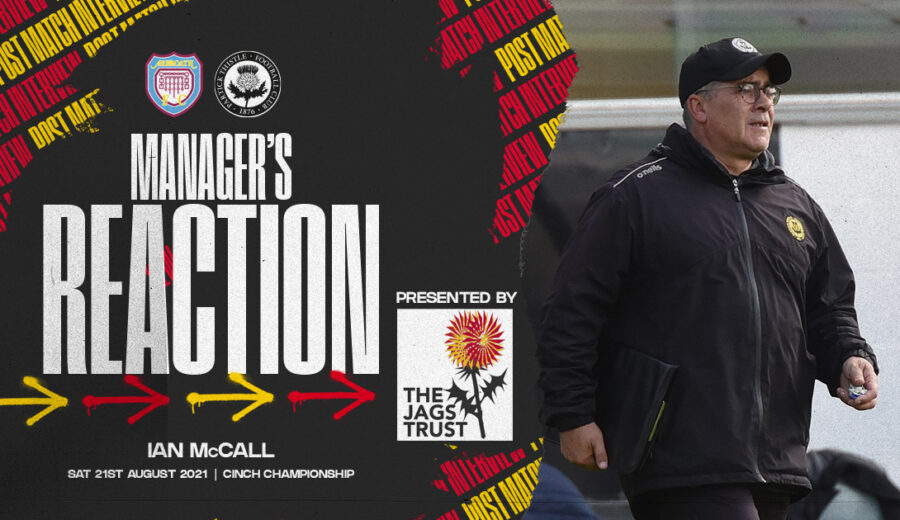 Partick Thistle suffered their first defeat of the new cinch Championship season this afternoon as they were beaten 3-1 by Arbroath at Gayfield Park. It was a game that started well for the Jags with a Colin Hamilton own goal putting the Maryhill men in front after 34 minutes, however, a Michael McKenna free-kick restored parity seconds before the interval. McKenna found the net again early in the second half before Nicky Low solidified the lead just before the hour mark and that’s how the game ended with Dick Campbell’s men claiming all three points. Thistle boss Ian McCall spoke to ptfc.co.uk after the final whistle:

“During the first half we were as comfortable as I’ve seen coming to Arbroath with any team. We created some good opportunities, and should probably have had more than one goal to show for it.

“It was an individual mistake which meant we weren’t leading going into half time which would have made all the difference. It’s a mistake and they happen but it needs to be learned from going forward. We were punished for another individual mistake in the second half which meant the game was very stretched as we battled to try and get back into it.”

A key moment arrived early in the second half when Zak Rudden headed Thistle into what they thought was the lead until the referee ruled out the goal for a Brian Graham foul.

“I’ve seen it back and I’m confused as to how there is a foul in it. It is one we can feel harshly done by but that’s not the reason why we lost the game. It was a  key moment though, as going 2-1 up completely changes the game.

“We created a number of chances today that were well saved by the goalkeeper, so it’s encouraging we are creating these opportunities but we need to keep being as clinical as we have been so far this season.

Thistle hit the front just after the half hour mark with Kyle Turner central to the goal but the manager was disappointed he didn’t see more moments like the one that led to the goal.

“It was a great run from Kyle and he’s got that ability to just flip the switch and drive. He did really well and earned the bit of luck he got with the own goal but the frustrating thing was we didn’t see more of that throughout the match.”

One bright spark for Thistle was midfielder Cammy Smith who came off the bench in the second half and looked lively as the Firhill side chased the game and McCall says he’s looking forward to seeing more from the number 11.

“Cammy did well when he came on. He gave us a bit of a different threat in between the lines and that was probably the only bright spark of the second half. He did really well when he came off the bench at Dunfermline as well and I know there’s more to come from him this season.”

There was a strong contingent of supporters wearing red and yellow at Gayfield and the gaffer was disappointed that they weren’t rewarded for their travels.

“It was a fantastic Thistle crowd that travelled up today and we’re all disappointed that we didn’t send them home happy. Listen, Arbroath is never an easy place to go and we have no divine right to win, we have to earn it. In this league, you’ll lose games of football, but it is how you react to it that will dictate your season. We have to shake it off, train well and look forward to a game next week at Firhill where I’m sure the Thistle fans will be out in numbers making a terrific atmosphere.”

Further reaction from Thistle manager Ian McCall will be available for JagZone subscribers to watch later – log in to view.