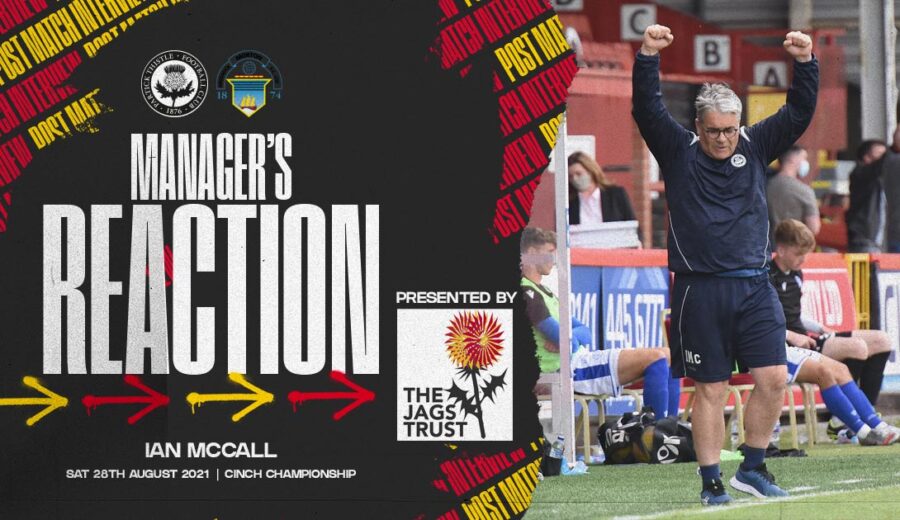 Partick Thistle made a victorious return to Firhill this afternoon as they beat Greenock Morton 3-0 in the cinch Championship. Goals from Kevin Holt, Zak Rudden and Brian Graham fired the Jags to the three points as they scored three goals for the third time in four matches and moved up to second place in the table. Thistle manager Ian McCall spoke to ptfc.co.uk following the final whistle:

“That was a really enjoyable performance and, if I’m being honest, we should have scored a few more. We played some great stuff early on and then throughout the second half and we just looked like such a threat going forward.

“We’ve got plenty of pace in the side and creativity as well but I was very impressed with the defenders too today. They were the bedrock that we worked from and the centre-halves in particular were fantastic.”

After a decent first half, Ian was delighted to see his team kick on and put the game to bed quickly after the interval.

“We had a few decent chances before half-time but Morton were still in the game and had a threat at that point. We came out for the second half though and turned it up a notch I thought. As I’ve said, we could have been a bit more ruthless and added two or three more to the score but I was really happy with the way we put the game to bed after half-time.”

Two of Thistle’s goals came from set plays and the manager lauded Kyle Turner’s delivery from corners which caused Morton no end of issues.

“Kyle had a solid game and he’s an important for us but I have to mention his set pieces. We scored twice from them but we could have a couple more at least and that’s a terrific asset to have. He set up two against Dunfermline and another two today so hopefully it just continues for the rest of the season.”

As well as another three goals to add to the season’s tally, Thistle also managed to record their second clean sheet of the season today and the manager took some time to expand on his earlier praise of the backline.

“The back four were terrific as I mentioned earlier. We looked very organised today and even when Morton had a 20 minute spell in the first half when they were on top, we stayed tight and compact and didn’t give them any easy opportunities.

“Tunji came in to the centre of defence and looked brilliant. He was strong, he showed his pace when he needed to, I felt he could have used the ball a little better here and there but all in all it was a great first start. Shea Gordon deserves a mention too. He did really well offering an option going forward and doing what he needed to at the back.”

The Jags are up in second spot as they head into a break from league action but McCall says the squad aren’t getting too far ahead of themselves despite the positive start to the Championship campaign.

“We’re up at the top just now but there’s a long way to go. It’s a great start for us and what it does do is it sets up a really interesting game in two weeks’ time up at Inverness. We’ve got to focus on the Stranraer game first and that’s what we’ll do this week but that’ll be a big game up there.

“When I look back a couple of years to when I came here from Ayr and then I look at where we are now, it’s a huge step forward and there’s a totally different atmosphere around the club. There were over 3,000 fans in today and hopefully they enjoyed that display because that’s the sort of football we’ll be aiming to play every week.”

Further reaction from Thistle manager Ian McCall and Shea Gordon will be available for JagZone subscribers to watch tonight – log in to view.