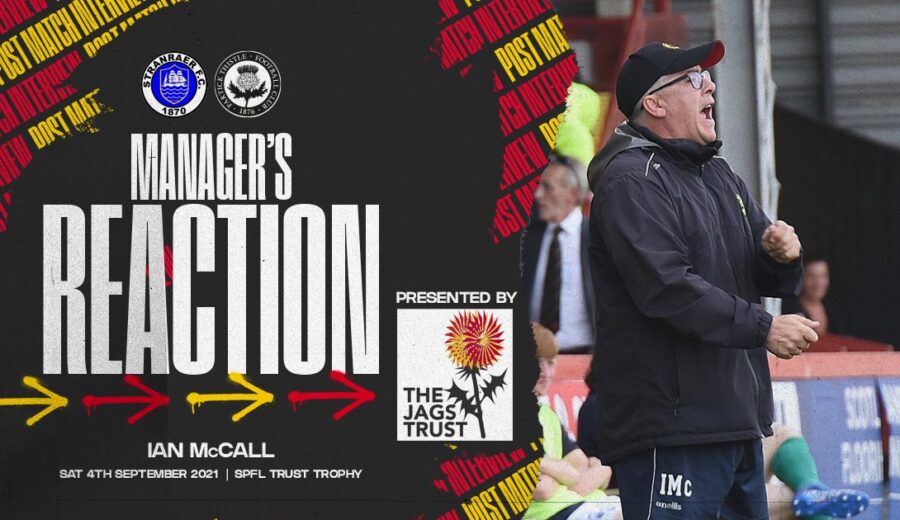 Partick Thistle booked their spot in the third round of the SPFL Trust Trophy this afternoon as they beat Stranaer 2-0 at Stair Park. The Jags won the game thanks to the goalscoring exploits of their two centre-halves with Tunji Akinola and Kevin Holt finding the back of the net either side of the half-time break. Akinola fired the Maryhill men in front with an emphatic left-footed finish in the first half while Kevin Holt netted his third of the season in injury time at the end of the game. Jags boss Ian McCall gave his thoughts to ptfc.co.uk following the victory:

“It’s good to get the win first and foremost and I was really happy with the first half performance. We were well on top and should have scored a couple more at least but at the end of the day we’re through and that’s what it’s all about in cup football.

“We used the wide areas well in the first half and created some really good chances but just weren’t ruthless enough when in front of goal and with the score at 1-0 it was still game on going into the second half. Credit to Stranraer though, they came out after half-time and pushed us right to the very end.”

Despite the pressure from Stranraer after the interval, the Jags secured their third clean sheet in four games to see the win out and McCall was pleased with his team’s solidity.

“As I’ve said, they made it a real cup tie in the second half and it became a bit end-to-end at times. We stood up well to that though and Jamie didn’t need to make all that many saves overall. Tunji and Kevin looked very good together again, winning headers and making blocks so I was happy with how we dealt with what Stranraer threw at us.”

It wasn’t just defending on the agenda for Akinola and Holt with both of them finding themselves on the scoresheet; something that the gaffer was very happy with.

“Holty’s on some run at the moment which can only be a good thing for us. As for Tunji, his was some finish, a really good goal so I was very pleased for him. Having the threat of goals from all over the pitch is serving us really well at the moment and hopefully it continues.”

Thistle number 11 Cammy Smith made his first start in today’s game and he completed 90 minutes which the manager says should do him the world of good.

“Cammy’s been great for us off the bench over the last few weeks so it was good to get him a start this afternoon. He looked very lively throughout the game and was unlucky not to get a goal but I still think there’s a lot more to come from him. Getting these minutes into his legs will hopefully benefit him too.”

Thistle youngsters Ji Stevenson and Ben Stanway were able to make their senior debuts in the dying stages of the game and Ian said it was good to get the duo on for their first taste of the professional game.

“We had four young boys on the bench today which will be a good experience for them but I was really happy to get Ji and Ben on the pitch even just for a couple of minutes. There’s a very talented group of young players coming through the academy at the moment and getting them in and around the first team is great.”

The Jags are on the road again next week to face Inverness at the Caledonian Stadium and McCall is looking forward to the top of the table clash.

“It sets us up nicely for that trip up north. It’ll be two teams in good form and in good spirits so it should make for a good game. They’ve been excellent so far this season and it will be a really difficult game but we’re confident at the moment and will go into the game looking to get the win.”

Due to technical issues, there is no JagZone reaction from the Jags camp this afternoon.

We’ll have extended highlights and a full game replay of today’s match on JagZone tonight.