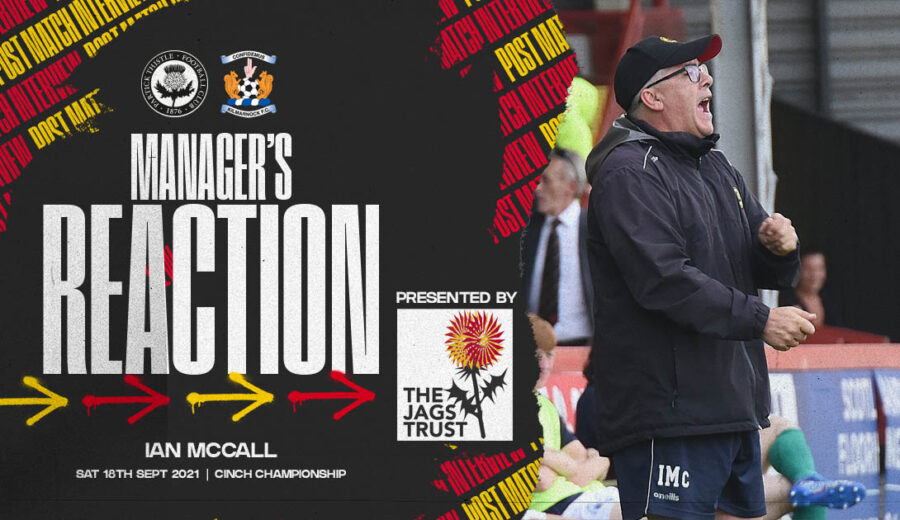 The cinch Championship season continued this afternoon for Partick Thistle as they fell to defeat against Kilmarnock at Firhill. The Jags knew victory would bring them level on points with Tommy Wright’s side, however, it was the visitors who took the win with two second half goals. After a relatively low-key first half, Killie were presented with a great chance to go ahead when they were awarded a penalty early in the second half. Jamie Sneddon was able to save the penalty but Thistle’s euphoria was short-lived as a Kevin Holt own goal put the away side in front a couple of minutes later. Oli Shaw added a second not long after with Killie going on to see out the game to maintain their 100% away record in the league this season. Jags boss Ian McCall spoke to ptfc.co.uk after the match:

“It was a game that started well for us but we didn’t actually create anything clear cut which was the major difference between the two teams today. Generally, there was very little between us but they were able to carve out three or four decent chances and they deserved to win because of that.

“They went with the long ball and that caused us problems right throughout the game and that’s how they get their second goal. These last two weeks we’ve played teams who I think will be among the best in the league this year and, to be honest, I don’t think we’re that far off.”

The manager reflected a bit more on the very evenly-contested first half, ruing his side’s inability to capitalise on early dominance.

“We came out and dominated the first 25 minutes or so but, as I said, we just couldn’t turn that into opportunities. They had a spell towards the end of the half where they came back into it but overall I felt we had the better of the first half. The thing is, though, they still had the best chance when their boy breaks through and Jamie has to make a good save.”

Killie’s opening goal came only a couple of minutes after Jamie Sneddon made another great save to deny Oli Shaw from the penalty spot and the gaffer was disappointed his team didn’t use that save as inspiration to push on.

“That was a moment that I felt we really should have used as a catalyst for the rest of the game but instead we go and lose a bit of a soft goal and that kind of knocks the stuffing out of us. It’s an unfortunate goal with the way it bounces in off Holt from Foster’s clearance but it was just a shame we couldn’t get some sort of boost from the penalty save.

“They then go and get their second with a big ball down the middle of the park and that felt a bit soft too although it was some finish to be fair. From that point on they were very professional and made it very difficult for us to make any headway. They’re a team with plenty of experience and they used it to see the game out.”

The manager then took a moment to give Jamie Sneddon some particular praise with the number one having made great saves either side of half-time including that penalty stop.

“Last week was a very tough day for Jamie but he was very good for us this afternoon. The save in the first half was great and then he’s done well to save the penalty as well so I felt for him a bit but it was good to see him bounce back.”

“It becomes even more important now because we’ve got three games left until we’ve played everyone once. Our aim is to be up in that top four and although we’ve started well we need to keep picking up points to stay near the top otherwise teams will quickly start catching us.”