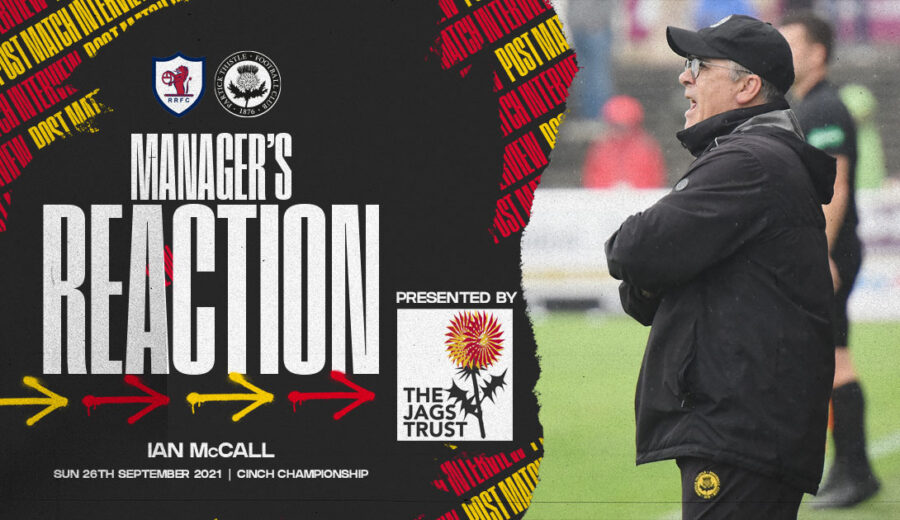 Partick Thistle’s first competitive trip to Stark’s Park in eight years was an unsuccessful one this afternoon as the Jags fell to a 3-2 defeat against Raith Rovers. A first half goal from Dario Zanatta started the scoring before two second half Kyle Benedictus strikes put John McGlynn’s side firmly in control. Late goals from Brian Graham and Zak Rudden reduced the deficit to one but there wasn’t time for a Jags leveller as the Maryhill men suffered their third consecutive defeat. Thistle boss Ian McCall spoke to ptfc.co.uk following the final whistle:

“That was a really frustrating one because we showed late on that we can be dangerous but it was too little too late. We started the first half well and finished the game strongly but that spell in between cost us. At 1-0 you’re always in with a chance but we end up three down which is a mountain to climb.

“There were a couple of big decisions in terms of penalties that we didn’t get. I know the Thistle fans will have had a great view of them but that happens in football. We allow ourselves to get caught out at the other end and we give ourselves a long way back..”

The Maryhill men found themselves a goal down at the break and McCall was frustrated to be trailing after what he felt was a fairly even opening 45 minutes.

“We started pretty well but didn’t threaten too much which was disappointing. Saying that Kyle does have a shot off the bar which could have put us ahead, Jamie MacDonald has made a great save and Ross Docherty’s shot was just inches past so we did have chances. Raith were looking dangerous when they won the ball and they’ll feel that they might have had a penalty in the first half too but in general from open play we felt solid.

“Even after they went ahead we thought we looked pretty lively and Brian had a decent headed chance which could have made it 1-1 so we felt a bit hard done by to be behind at half-time.”

Today’s game represented the third consecutive away league match where Thistle have conceded three goals and the gaffer was left ruing the way his team conceded the goals today.

“We can pick faults in them from our side but at times you do have to realise that there are two teams on the park and Raith scored a good goal in their eyes with the first. We’ll be disappointed for it, especially as it was a set piece, but it was good movement and a finish from a player we know well. The second one is just quite unlucky with the way the penalty was given but the third one is a bit frustrating.

“As I said earlier, we felt relatively comfortable from open play but we’ve lost again today. We niow go into a busy October with a chance to finish the first quarter of the season on a high and that’s what we’ll be looking to do.”