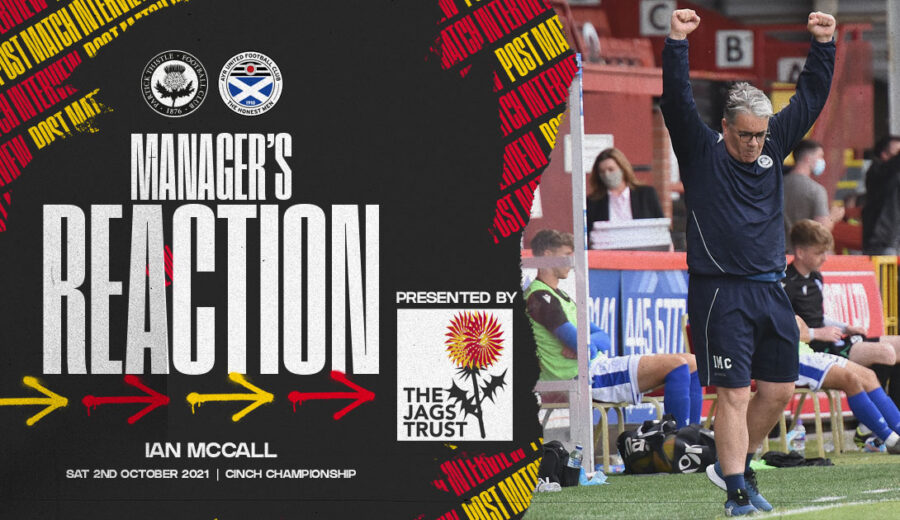 It was back to Firhill and back to winning ways for Partick Thistle this afternoon as they beat Ayr United 4-0 in the cinch Championship. Zak Rudden was at the double with goals either side of half-time while Cammy Smith and Brian Graham also got on the scoresheet in a convincing victory for the Maryhill men which emphatically ended Thistle’s run of defeats. Jags boss Ian McCall spoke to ptfc.co.uk following the game’s conclusion:

“We played really well today I thought, particularly in the second half. We probably could have scored more goals than we got in the end but I can’t complain about a 4-0 win.

“The two guys in the middle of the park, Ross Docherty and Stuart Bannigan, were excellent and allowed us to control things for the majority of the game and that started in the first half. We maybe weren’t as dangerous early on as we were after half-time but I still felt we were well worth the two-goal lead.”

Despite not carving out too many clear opportunities in the first half, Ian was pleased with how clinical his side were when the chances did eventually come.

“They made it really difficult for us with the five-at-the-back which meant we had to be patient with the way we attacked. Kevin Holt had a decent chance with a header but that was pretty much it for either side in the first 30 minutes until we put a couple of really good crosses into the box and got our goals which, as I said, I felt we deserved.”

After three straight league defeats, many might have expected Thistle to struggled against a recently reinvigorated Ayr side but the gaffer never doubted his team’s ability to get back on track.

“We’ve got a group of players in the dressing room who know what they’re capable of. You’re going to have spells during the season where you struggle a bit but it’s about how you respond to that and they deserve a lot of credit for that performance today.

“The league is still very tight and the results today show how unpredictable things are going to be this season. It was important that we kept ourselves in the mix at the right end of the table with a result today and we’ve done that – now it’s about carrying that forward for the rest of October which is going to be a big month for the whole league.”

McCall moved things about in defence for this afternoon’s game and the alterations paid dividends in the form of a clean sheet which he was delighted with.

“We wanted to bring Tunji into the team and that meant moving Kevin Holt back to left-back and Richard Foster over to the right. It meant a new partnership between Tunji and Lewis Mayo in central defence but I thought it worked really well and the whole back four was superb.

“They also got great protection from the two guys in front of them that I mentioned earlier and that meant we had a really solid foundation that allowed the front four to go for it.”

Now the team prepare for an SPFL Trust Trophy clash with Queen of the South at Palmerston Park next Friday night and the boss is keen to keep the positive feeling going.

“It’s a break from the league but we want to build on today’s result. We will probably make a few changes and give some different players a chance to get some minutes but it’ll still be a strong team because it’s a chance to get into the latter stages of a cup competition which you always want to do.

“We’ve played them once already this season and it was a tough game that day so we know it’ll be difficult but hopefully we can take confidence from today’s win and put on another good performance.”

Further reaction from Thistle manager Ian McCall and Ross Docherty will be available for JagZone subscribers to watch tonight – log in to view.