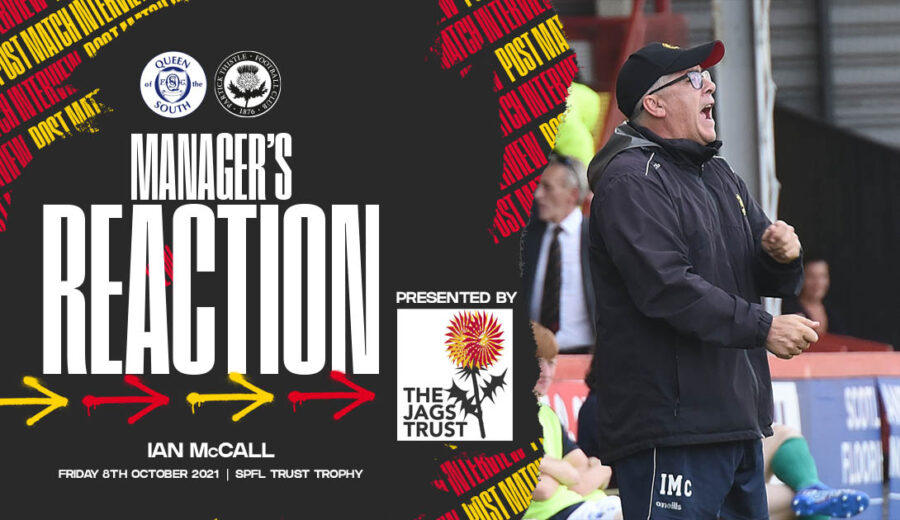 Partick Thistle were knocked out of the SPFL Trust Trophy this evening as they lost 2-0 to Queen of the South at Palmerston Park. After a fairly low-key first half, a sensational Lee Connolly strike from 25 yards gave the home side the lead and as the Maryhill men pushed for an equaliser, they were hit on the counter with Ally Roy adding a second goal in injury time. Jags boss Ian McCall spoke to ptfc.co.uk following his side’s cup exit:

“It’s a disappointment for sure because we had our chances in that game. Tiff has one early on that he would usually score – he gets fouled before he gets a chance to hit it but stays up and doesn’t get the penalty. Cammy Smith wasn’t far away from a tap-in when the ‘keeper spilled Stephen Hendrie’s shot.

“I thought we were much the better side for the first half and had the better chances but for some reason we let our levels slip after the break. They were very well-organised with their five-at-the-back and we couldn’t find a way through which was very frustrating.

“At the end of the day though, it took a fantastic strike from their boy to open the scoring and then they hit us on the break when we’ve got everyone up for a corner for the second.”

Thistle turned the tempo up late on and put the Queens defence under some decent pressure but the gaffer wishes he’d seen that from his side a bit earlier in the second period.

“We made some changes and eventually we started getting into their final third but we didn’t test their goalkeeper enough, Ross MacIver had a really good chance and there were a couple of other half-chances but they were very stubborn with plenty of bodies behind the ball.”

Stephen Hendrie played the full 90 minutes as he made his Thistle debut and McCall was pleased to see him go the full distance.

“It was great to get him a full game because he’s not played a competitive game since last season. I was pretty impressed with him, especially in the first half when he was looking dangerous going forward. He definitely tired later in the game but I think it was a promising performance from him overall and the gametime will do him the world of good.”

The Jags now head to Hamilton next Friday night for the final game of the first round of Championship fixtures and the manager says it’ll be a big game at the Fountain of Youth Stadium.

“Every game is massively important for us in the league just now. It’s still very tight but we go to Hamilton with the chance to pick up three points that will make it a good first quarter.!