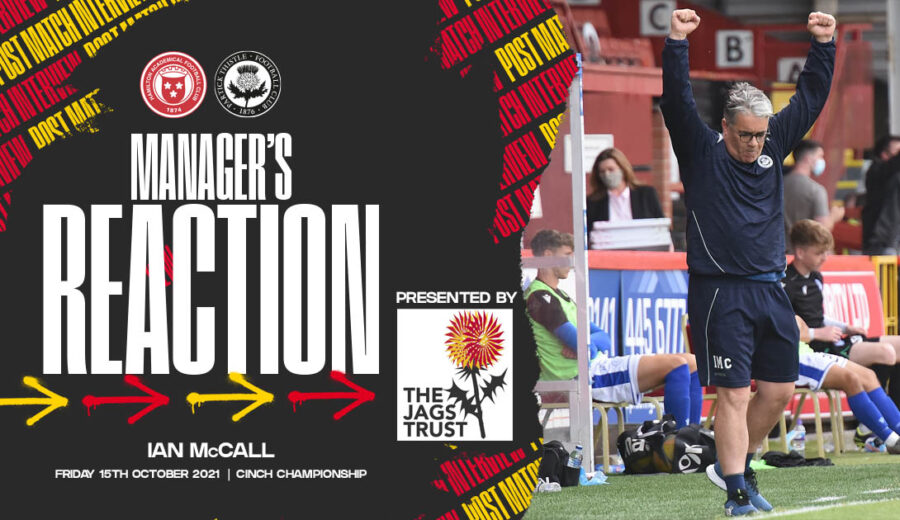 Partick Thistle returned to cinch Championship action in emphatic fashion this evening as the Jags hit Hamilton for six at the Fountain of Youth Stadium. An early Zak Rudden goal proved to be the only goal of a tightly-contested first half but a second half barrage from the away side spelt disaster for Accies. Brian Graham put Thistle two up before quick-fire strikes from Zak Rudden and Scott Tiffoney put the Maryhill men in a very commanding position. Connor Murray came off the bench to add a fifth which was followed by another Brian Graham goal to make it six. David Moyo scored a late consolation to save a bit of face for the hosts but it didn’t take the shine off an utterly incredible performance from Thistle. Jags boss Ian McCall spoke to ptfc.co.uk following the game:

“I’m absolutely delighted with that. Performances like that one don’t come along very often so we’ve got to enjoy them when they come. We started well and deserved the goal we got but Hamilton came back into it towards the end of the first half and it looked like we were set for a tight game but we were just relentless after half-time.”

Thistle’s frontline ran riot after the interval and the gaffer said it was terrific to see the attackers playing with so much confidence.

“We looked like scoring whenever we had the ball for a spell in that second half and we were taking our chances as well. There have been a few games where we’ve threatened to score six but maybe been a bit wasteful with the odd chance; tonight we were clinical and it was great to see the team enjoying their football so much.

“Brian Graham and Zak Rudden were both brilliant with the goals they got but also the way they linked play and set up others for chances. Scott Tiffoney was on fire as well and when he’s in that sort of mood there’s no one who can stop him in this league.”

The team didn’t quite manage to keep their clean sheet in the end with David Moyo netting a late consolation but the boss was still full of praise for his backline.

“We lost Kevin Holt very early and that could have unsettled us but we regrouped brilliantly. Ciaran McKenna came on and I thought he slotted in perfectly. Richard Foster was outstanding I thought and the two centre-halves did an excellent job again too. Jamie is gutted that he didn’t get his clean sheet which is a good attitude to have but he shouldn’t get too down on himself.”

Next up for Thistle is a home match against Dunfermline and McCall knows the big win tonight won’t count for anything come 3pm next Saturday.

“Just as we put a defeat behind at the start of the next week, we have to do it with a win. If you get too hung up on how good you were last week then you let your levels drop but we know we can’t afford to do that in this league.

“It’s going to be another important game next Saturday and we need to prepare properly so that’ll start on Monday. For now, I hope the fans really enjoy that one because they deserve it.”