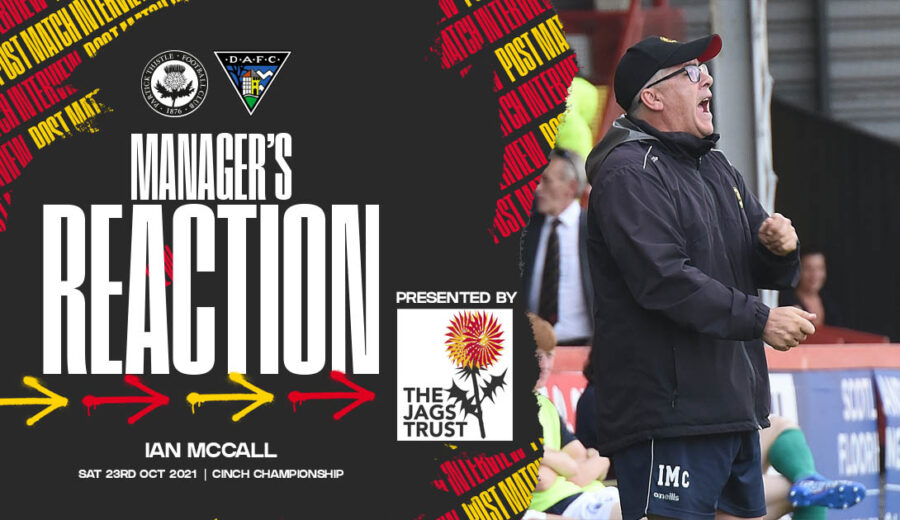 As the club welcomed the legends of 1971 back to Firhill to celebrate 50 years since their historic League Cup triumph, Thistle were held to a goalless draw by Peter Grant’s Dunfermline Athletic. The Jags had scored ten goals in their previous two Championship matches but couldn’t find a way past the Pars with Ross Docherty coming closest as Owain Fon Williams touched his goal-bound effort over the bar. At the other end, Jamie Sneddon also had some work to do as he denied Craig Wighton from close range after the Dunfermline number nine stole the ball off the toes of Tunji Akinola. In the end, the points were shared as Thistle drew their first match of the 2021/22 season and maintained fourth position in the league table. Jags boss Ian McCall spoke to ptfc.co.uk following the final whistle:

“I didn’t think we really hit the levels of the last couple of games to be completely honest but we still dominated most of the game. We lacked something in the final third; the crossing was poor and we were slack with passes but it still felt like one we could have just nicked.

“They came here and seemed to be playing for a point, certainly in the first half, but we could have done more to break them down. Scott Tiffoney had a couple of moments where he looked like he was going to break through but they always closed the gaps pretty quickly and they were throwing their bodies on the line to make blocks.”

Thistle’s best opportunity of the game probably came through Ross Docherty as the Jags skipper sought to pick out the top corner from 20 yards, seeing his effort well tipped over by Pars ‘keeper Owain Fon Williams, and the gaffer felt the team should have got more shots on goal.

“We got into the final third plenty but, as I said earlier, that final ball was missing which wasn’t the case against Hamilton or against Ayr. They were very compact and we just didn’t test the goalkeeper as much as we wanted to. The one time we did get a good shot in, the ‘keeper makes a sensational save to turn away Doc’s shot.”

The clean sheet means Thistle have only conceded once in their last three league games and McCall says he’s been impressed with the backline recently.

“I think there’s a lot potential in Tunji and Lewis Mayo as a partnership. Tunji was excellent today apart from one moment where he gave the ball away in our box but then Jamie Sneddon steps up and makes a huge save.

“It was great to see Jamie make that save. He made some mistakes earlier in the season and I’ve spoken to him about that but recently he’s been more consistent. He came and caught a few difficult crosses as well in that second half so we’re just hoping he continues at his current level.”

Thistle now move on to a game against Greenock Morton at Cappielow on Tuesday night and the manager thinks the draw now puts a bit more pressure on the trip to face the Ton.

“Well, we wanted to go and get two wins in these games but now we’ve only taken a point today, we really need to go and get three in midweek. We need to be picking up points if we want to stay up in the top four but it’s not going to be easy against Morton, it’s rarely an easy game at Cappielow so we’ll need to make sure we prepare properly for that one.”

Further reaction from Thistle manager Ian McCall and Richard Foster will be available for JagZone subscribers to watch tonight – log in to view.