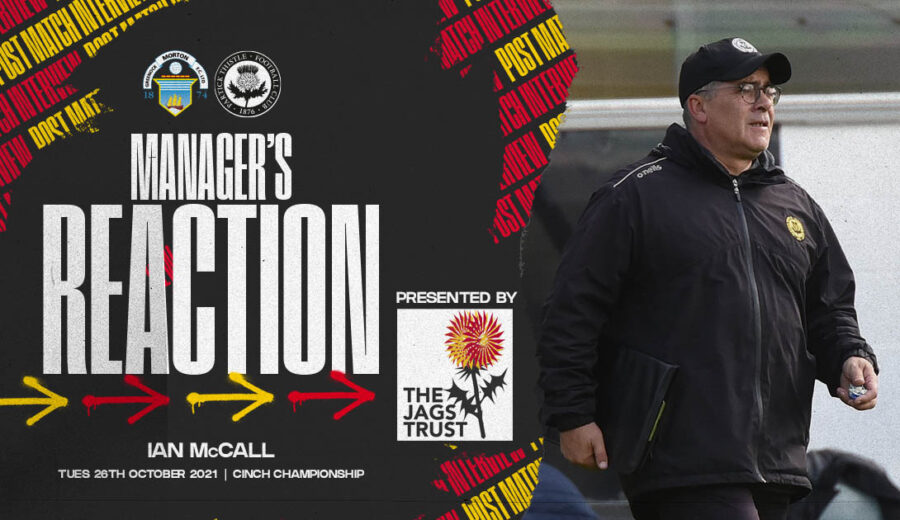 Having gone through the entirety of the first quarter of cinch Championship games without a draw, Partick Thistle have made it back-to-back stalemates since the start of the second quarter. The Jags drew 0-0 with Greenock Morton tonight following on from Saturday’s scoreless affair against Dunfermline Athletic as they once again struggled to carve out many clear-cut chances. The Firhill side had their best opportunity of the game after just a couple of minutes when Zak Rudden burst onto a long ball over the top of the Morton defence only to be denied by Jack Hamilton. The home side almost stole a late win when the ball fell to Alan Lithgow at the back post from a high delivery into the box, however, the defender’s half-volley was cleared off the line by Stuart Bannigan and the game finished level. Thistle boss Ian McCall spoke to ptfc.co.uk after the match:

“It was another game where we didn’t do enough to deserve to win which is disappointing. Like Saturday, we lacked a spark going forward and couldn’t create chances despite getting into some good positions. We were finding space in the wide areas but couldn’t get the crosses right and a point was all either team deserved in the end.”

Having drawn a blank at the weekend, McCall was frustrated to see his team struggling to create chances again tonight.

“It’s unlike us but that’s now two games in a row where we’ve had enough of the ball to do something but failed to threaten the other team’s goal. Zak had a good chance early on and that could have changed the whole game but it doesn’t go in and after that we barely have a shot on goal. Tiff had one that fell to him from a corner but there wasn’t much more to talk about than that.”

Despite the team attacking woes, the game did represent another clean sheet for the team which pleased the gaffer.

“The back four did well again; we’re very happy with how they’re doing at the moment. Again Tunji and Mayo looked solid and they had to do a lot of the dirty side of the game tonight. Everyone gave their all and they were throwing their bodies in for blocks so we can’t fault their commitment, we were just disappointed with the lack of attacking intent.”

Jamie Sneddon was singled out for a bit of extra praise as the goalkeeper claimed his fourth clean sheet in nine league games this term.

“Jamie didn’t actually have much to do tonight in terms of saves but he still played well with the way he came for crosses and the way he distributed the ball. A couple of times he started counter-attacks with long throws after he caught crosses and that’s a good asset.”

The team now turn their attentions to Saturday’s cinch Championship clash with Inverness as Thistle look to avenge the 3-1 defeat they suffered at the hands of the Caley Jags earlier this season.

“It’s another really big game and we’ll need to be better than we have been over these past two games. We know we’re capable of better though so we have to go into Saturday with belief. The league has really tightened up recently so we have to look at this game as a chance to get a big three points to move closer to the teams at the top of the league.”