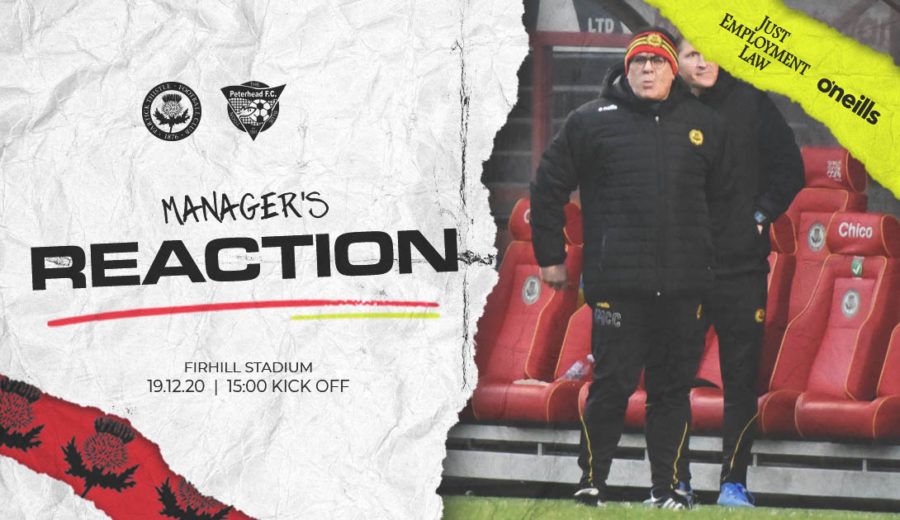 Partick Thistle suffered their first Firhill defeat of the competitive season this afternoon as Peterhead claimed a 1-0 win in Maryhill. A Scott Brown goal on the half hour mark put the Blue Toon ahead and Jim McInally’s side saw that lead out to take all three points back to Balmoor. Jags boss Ian McCall spoke to ptfc.co.uk after the final whistle:

“I thought for the first half an hour of the game we played pretty well and they were never in our half but we’re watching the same movie again, like the home game against Dumbarton. To be honest, after their goal I don’t think we played well. We still created some chances but it was just a poor, poor result for us.”

“For the amount of possession that we had we should have made a lot more chances and tested their goalkeeper a lot more. There’s no getting away from it; it’s a really bad result and we need to recover from it straight away.”

Thistle found some joy on the flanks early on but McCall said the quality had to be better to give the Jags’ attackers something to feed off.

“In the first half, we got in some good space out wide but our deliveries weren’t good enough and once they got in front they sat in and defended their own half very well. We pushed for something and I made changes to try to find some sort of spark but we just couldn’t find a way through.”

Scott Brown scored what was ultimately the winning goal with 15 minutes left to play in the opening 45 and the gaffer voiced some disappointment regarding the manner of the goal.

“It was a scrappy goal to give away and it’s frustrating to concede from a situation where we had the ball. We give it away in our own half and then have a couple of opportunities to get a tackle in but don’t clear it and get punished for that with a really good finish from their lad.”

Ciaran McKenna and Zak Rudden returned to the matchday squad today after lengthy spells out injured with the latter getting on in the second half and Ian was pleased to see a couple of Thistle’s recent absentees on the bench again.

“It was great to welcome Zak and Ciaran McKenna back to the squad and I put Zak on in the second half to try to add a bit of pace up front. He’s not at 100% yet but we’re really excited about his potential if he can stay fit and get a run in the team.”

A further reaction interview with Thistle gaffer Ian McCall and Ross Docherty will be available for JagZone subscribers to watch – log in to view.