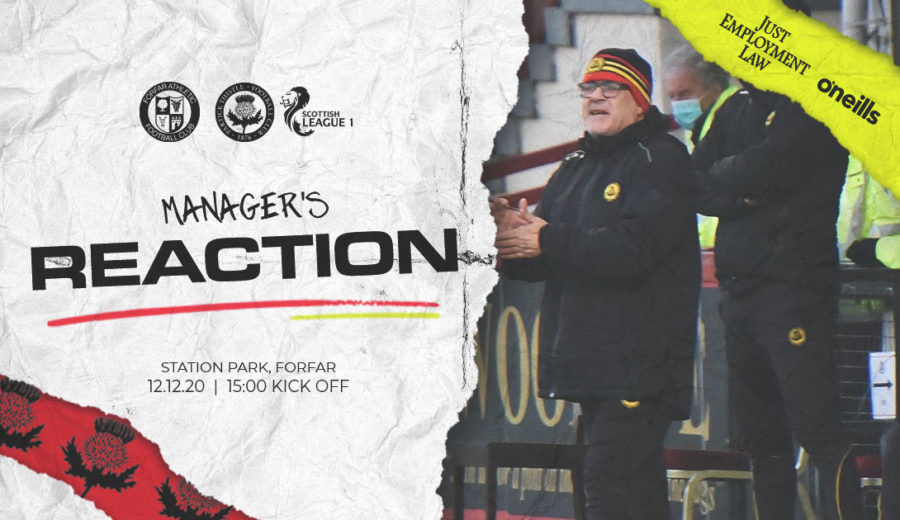 Partick Thistle made it six games undefeated this afternoon as they beat Forfar Athletic 2-0 in League One action. Following a goalless first half the Jags produced a much-improved display post-interval with Shea Gordon scoring the opener after 52 minutes having replaced the injured Connor Murray earlier in the contest. Skipper Ross Docherty added a second with just over ten minutes to play as the midfielder notched his first goal for the club to make things slightly more comfortable as full-time approached. Thistle gaffer Ian McCall spoke to ptfc.co.uk following the end of the game:

“We controlled most of that game and goals have been hard to come by for us recently but we got two good ones today. I think again we could have had more but we created much more against Dumbarton last week and scored none so I’m really pleased to get those two goals and the three points.

“It wasn’t an easy game at all and I’m proud of the way the boys stuck with it and got that win. We’ve still got seven or eight guys out at the moment but we’re hoping to have a couple back in training next week at least and hopefully we’ll be seeing the light at the end of the tunnel as far as injuries go.”

The teams were level at the break but Ian says his message was simple for the squad at half-time.

“I just told them to keep doing what they were doing really. To make sure they weren’t panicking or getting too frustrated as well and to move the ball a bit better. I think Stuart Bannigan and Ross Docherty were slightly off it in the first half so we wanted to get them more involved and you could see them influencing the game a lot more in the second half.

“We wanted to see more bodies in the box and today we had four or five guys trying to get in there and score a goal. We’re very happy with the result and that’s now five clean sheets in a row which is a great achievement. We’re now up to second too and we’re hoping that we’ll only get stronger when the injured boys start returning.”

The gaffer gave praise to the defence as he spoke a bit more on their run of shutouts.

“Sena, Darren Brownlie and Richard Foster have all been great. I think that they get great protection as well from the two in front of the defence so we’re really happy with that side of things. We want to be scoring more goals to take a little bit of the pressure off the guys at the back but obviously the longer this run of clean sheets goes on the better.”

“It’s another game where Kieran Wright hasn’t had much to do but, after we went two up, he had a save to make at his near post and he dealt with it well. There’s not been much for him to do over the past few games but he did well with that one today because it would have been a nervy finish to the game if it had gone in.”

The Jags’ last three goals have all come from players bagging their first of the campaign and Ian has been pleased to see different members of the squad chipping in on that front.

“To be honest, Ross Docherty should already be on about five for the season; he’s missed a few good chances but it was a terrific goal he scored. He just let it run across him and then he, in his words, Thierry Henry’d it into the bottom corner so it’s great for him to get off the mark.

“As for Shea’s, that was sort of a trademark goal for him with the way he found space in the box. It was a great header and a great ball from James Penrice who we felt was excellent in the second half.”

Thistle Weir Youth Academy graduate James Lyon made his first team debut as an injury time substitute and the gaffer gave a word to Lyon as well as Billy Owen, both of whom came into the matchday squad for the first time this weekend.

“Both James and Billy have been training with us and I think they look like good players. They’ve worked hard and earned their place in the squad today and if they keep that up they’ll get opportunities. James got on the pitch this afternoon but they’re both good kids and hopefully we’ll see more from them in the future.”

A further reaction interview with Thistle gaffer Ian McCall and Shea Gordon will be available for JagZone subscribers to watch – log in to view.