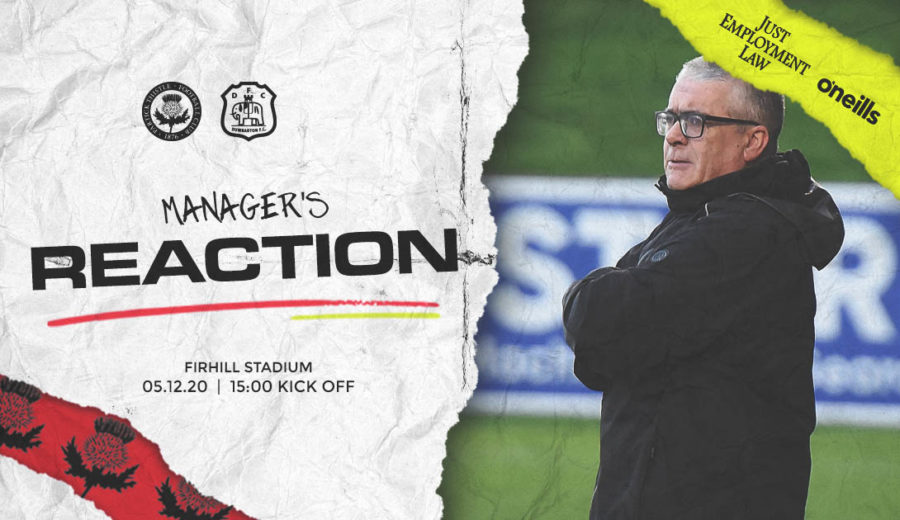 Partick Thistle were held to a goalless draw today at home to Dumbarton. The Jags managed 22 shots on the visitors’ goal but couldn’t convert any of their chances with the points shared at full-time. The draw lifts the Maryhill men into third in League One but will feel like a real chance missed in a game they dominated. Thistle boss Ian McCall spoke to ptfc.co.uk following the final whistle:

“Today should have been a day where I come away and talk about how we scored a number of goals. Since I have been back at Firhill, that’s the best we have played football wise, but we just couldn’t score today.”

“Shea Gordon and Connor Murray both had chances to score but it just didn’t happen for them. Docherty, Penrice and Cardle also had opportunities but for whatever reason we didn’t stick any of them away. We had a real off day in front of goal and Brian Graham is sitting there gutted that he never scored the penalty, but as I have told the boys, you win and lose as a team.”

The gaffer reflected on his side’s performance, taking some positives from how they defended and used the ball in the middle of the park.

“We have moved up a place in the league and kept another clean sheet. If we can continue to play like we have, keeping clean sheets and dominating the ball then we will have no worries.”

“I have not had many one-sided games like that in my career, the number of times we got to the by-line today and put in dangerous crosses was tremendous. As I have said, there are positives in the game, but it is certainly two points dropped.”

“The back line was excellent once again. We had a number of players that did very well so that was good to see. The centre-halves have been fantastic and they were again today. There wasn’t too much for them to do but whenever they had to go and win a tackle or a header I thought they were superb.”

Ian McCall also gave an injury update with some positive news for the upcoming weeks.

“We still have eight or nine out but the next time we play at home I’m hoping we have three or four of the players back. With some of the performances the starting eleven have put in over the last few weeks, they won’t be walking straight back into the team but they will certainly give us more options within the matchday squad”

A further reaction interview with Thistle gaffer Ian McCall and Richard Foster will be available for JagZone subscribers to watch – log in to view.