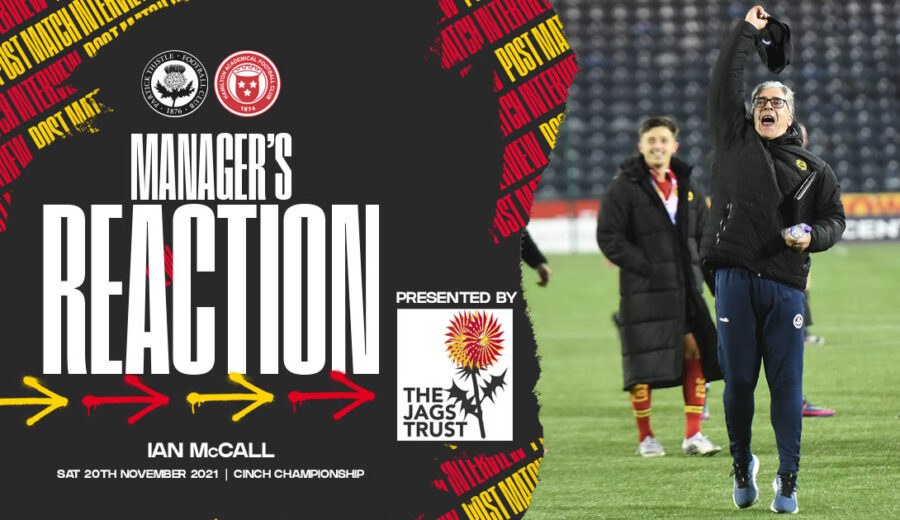 Partick Thistle made it three wins in a row today as they beat Hamilton 1-0 at Firhill thanks to Lewis Mayo’s first career goal. The number four headed home from Kyle Turner’s corner in the 57th minute for what proved to be the winner as Thistle moved to within two points of the top of the table. Accies pushed for an equaliser late on but the Jags’ rear-guard held firm to secure a club record sixth consecutive clean sheet in league action. Thistle boss Ian McCall gave his thoughts to ptfc.co.uk following the final whistle:

“I said at halftime that it was a horrible game and it wasn’t pleasant on the eye but at the end of the day it’s a huge three points and it could be one of our best results of the season so far considering the conditions and the opposition.

“The reason it was a particularly pleasing result was because it was a very hard game and we weren’t able to play the way we wanted to but still got the victory. It felt like a game that was going to be decided by a set piece or something and when you’ve got someone delivering balls like Kyle Turner does, you’re always in with a shout.”

The gaffer said that after a pretty poor first half he felt his side could have made more of the opening they got in the second half.

“After we got our goal it opened things up a bit for us. There were moments where we won the ball high up the pitch but then just didn’t work it quickly enough to create a chance which was disappointing. There was also that stunning hit by Cammy Smith which was really unlucky not to go in and could have made things more comfortable for us.”

Despite it not being a particularly pretty game, McCall emphasised the importance of the three points as things tighten up at the top of the table.

“We know we can produce better performances than that but on a day like this all that really matters is the three points. We’re on a good run at the moment and the win just continues that.

“I was really pleased for the fans at the end of the match as well because I think they understood that it was going to be one of those days where we’d have to grind out a result.”

In the process of securing the three points the team also broke a club record today as they made it six league clean sheets on the bounce for the first time in Thistle history and Ian credited the full line-up for the achievement.

“It’s been a very impressive run for us and it’s really been the basis of the unbeaten run that we’re on. The defence have been great but it’s a real team effort and everyone has played their part. It starts up front with Zak and Brian and then the midfielders and the defenders all the way back to Jamie in goals who has been terrific.

“Today we had to dig deep to defend some dangerous balls into the box but we got there in the end and that was the main thing.”

Further reaction from Thistle manager Ian McCall and Lewis Mayo will be available for JagZone subscribers to watch tonight – log in to view.