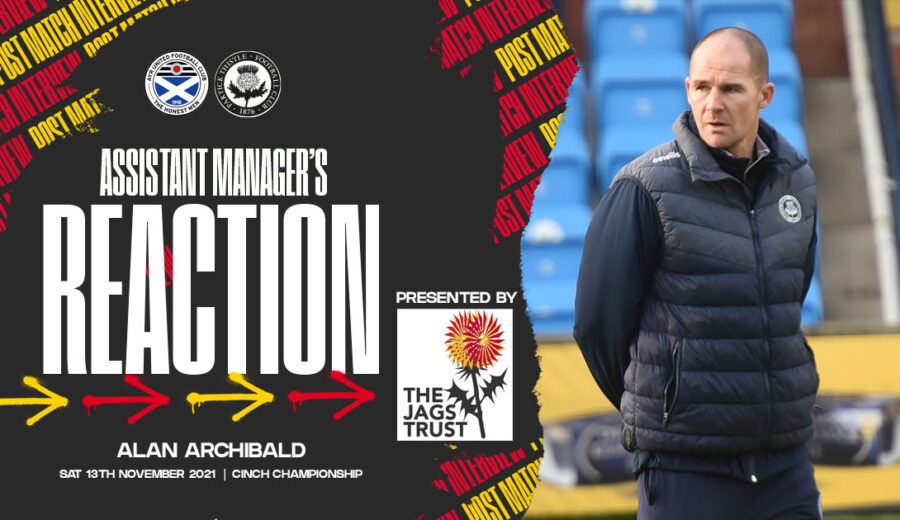 A convincing win over Ayr United at Somerset Park this afternoon made it seven games unbeaten in league action for Partick Thistle as well as five clean sheets on the bounce. Ross Docherty opened the scoring against his former club with a free-kick just past the hour mark before Brian Graham added a second shortly thereafter. Graham netted again with a second half header before substitute Shea Gordon rounded off the scoring in added time. The victory takes Thistle back into the top four, leapfrogging Arbroath thanks to their superior goal difference. Thistle assistant manager Alan Archibald spoke to ptfc.co.uk after the game:

“It’s a fantastic win for us. We knew we had to build off the back of the win at Rugby Park and that’s exactly what we’ve done. It started out quite frantically and it was a scrappy game for the first 20 minutes or so but that first goal settled us right down and we didn’t really look back after that.”

Brian Graham was recalled to the starting XI for the game and Archie was full of praise for the number nine who scored his fourth brace of the season today.

“I thought Brian was fantastic today. His goalscoring record since he’s been at the club has been remarkable and he brings so much more to the team than just those goals. We brought him back into the team today in a slightly different role than usual.

“Zak continued what he did last week at the top of the pitch while Brian was dropping in a bit more to mark their midfielders and his effort was first class from the first whistle to the last.”

With Lewis Mayo away on international duty some might have expected Thistle’s clean sheet streak to snap but the Jags held firm and made it five shutouts in a row much to the delight of the management team.

“It’s a great run we’re on at the moment. Again, Jamie didn’t have all that much to do because whenever they were taking shots they were either from long range or we were getting blocks in so credit has to go to that back four for the way they held their shape and remained organised from beginning to end.

“Ciaran McKenna came into the team and did really well. He defended confidently and also got the assist for the third goal which is what you want to see when someone gets a chance having previously been on the bench. We saw it with Connor Murray last week and it’s a sign of the strength we have in the squad.”

Now the Maryhill men look towards next week’s home clash with Hamilton which Alan says is going to be a crucial game for the team.

“We go into a break for the cup after the Hamilton game so we really want to go into that break on a positive note with the momentum that we’ve been building intact. Accies didn’t do themselves justice the last time we played them so I’m sure they’ll be desperate to get one back on us.

“We’re feeling confident though and we go into every game feeling like we can win. Our last two home games have been a little bit disappointing for us so hopefully we can get back to winning at home next Saturday.”

Further reaction from Thistle assistant manager Alan Archibald will be available for JagZone subscribers to watch tonight – log in to view.