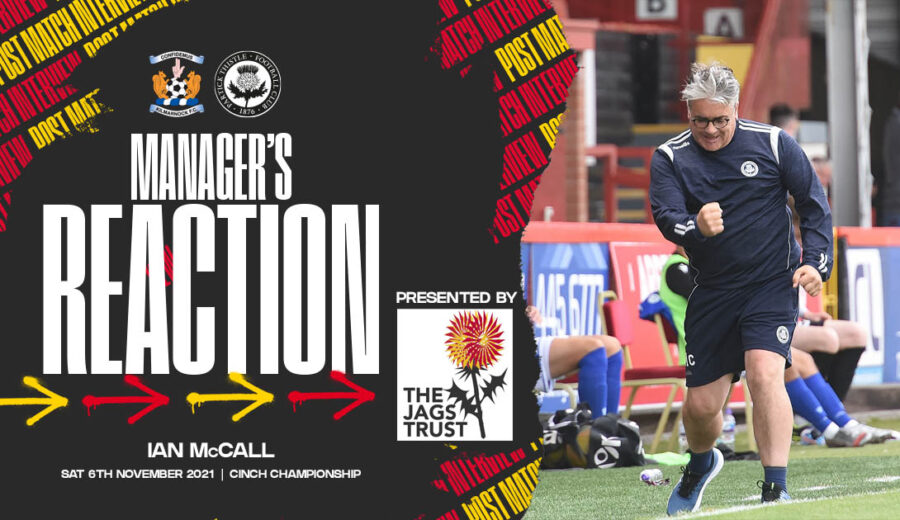 Partick Thistle ended their goal drought this afternoon as they picked up a massive three points against Kilmarnock at Rugby Park. After three full games without scoring, it took the Jags just three minutes to break the deadlock in Ayrshire as Zak Rudden latched onto a lofted through ball from Ross Docherty before lobbing the ball over Zach Hemming and into the back of the net. Thistle could have been two up later in the first half when Connor Murray played in Stuart Bannigan on the left side of the Killie box but this time Hemming was able to make the block to deny the Maryhill men a second. The hosts dominated the game in the second half but failed to carve out many decent openings though they very well could have snatched a point thanks to an injury time chance for Oli Shaw. A high ball in the Thistle box dropped to the ex-Hibs striker and he flicked a header towards goal which looked like it might find the bottom corner. However, as the case has been on a few occasions recently, Jamie Sneddon performed some heroics to keep the shot out and secure the point for the Firhill side. Jags boss Ian McCall spoke to ptfc.co.uk following the final whistle:

“It’s a great three points for us, we’re all delighted. To go away from home and beat the league leaders is no easy task but I thought we were excellent today. Everyone did their job from back to front and we were good value for the win in the end.

“We knew after losing to the other teams near the top in the first quarter that we’d have to improve on that the second time round. We managed that against Inverness with a decent point and we’ve done it again here with a great win against Kilmarnock so that’s extremely pleasing.”

Zak Rudden got the goal for Thistle in the opening three minutes and McCall reckons the early goal really settled his team down.

“Our struggle to score over the last three games was well-documented so we were really keen to get a goal today and I think to get one so early on was a massive boost for us. It gave the front players more confidence to go and attack and press with and I think we looked a real threat in that first half.”

The gaffer singled out the goalscorer for praise, not just because of his decisive third minute strike but also the rest of his performance.

“Zak led the line brilliantly today. He was up there as the lone striker which isn’t a role he’s played much here at Thistle but I thought he was outstanding. His running, his link play, his energy – he was terrific.

“We brought Connor Murray into the team to play off him and he was fantastic as well. He helped with the press and used the ball well which is exactly what we asked of him at the start of the game.”

He also paid tribute to his substitutes who came on towards the end of the game and helped the team see the game out.

“Cammy, Brian and Ross all played a big part for us in the closing stages. We knew we were going to be under pressure but they all did a great job. Cammy was first on and he did well to carry the ball up the pitch and give the defence a break at times.

“I’ve always said Brian is a very important player for us in both boxes when it comes to set pieces. When you’ve got corners and free-kicks coming in, he goes and attacks the ball and it’s a great asset for us. It was a real team effort this afternoon.”

The McCrea Financial Services Player of the Month for October was announced as Jamie Sneddon this morning but the goalkeeper had a pretty quiet day at Rugby Park until the 92nd minute when he had to save a goal-bound header from Oli Shaw and McCall was delighted to see the 24-year-old come up big in another important moment.

“Jamie’s performing well when we need him most at the moment which is a great attribute to develop. Last weekend he won us a point against Inverness and he made sure we got all three with that save right at the end.

“It was quite similar to the Dunfermline game in that we defended well for the majority but Jamie was needed for that one big opportunity and once again he was there to make the save so credit to him although I have to say, I was very impressed with the back four again. There are a lot of talented attackers in that Killie team but they kept them quiet for most of the game.

“It was just a great result for us and hopefully all the fans that made the trip, who helped keep the ball out of the net, and all the supporters who watched from home really enjoyed it and can enjoy the rest of their weekend.”