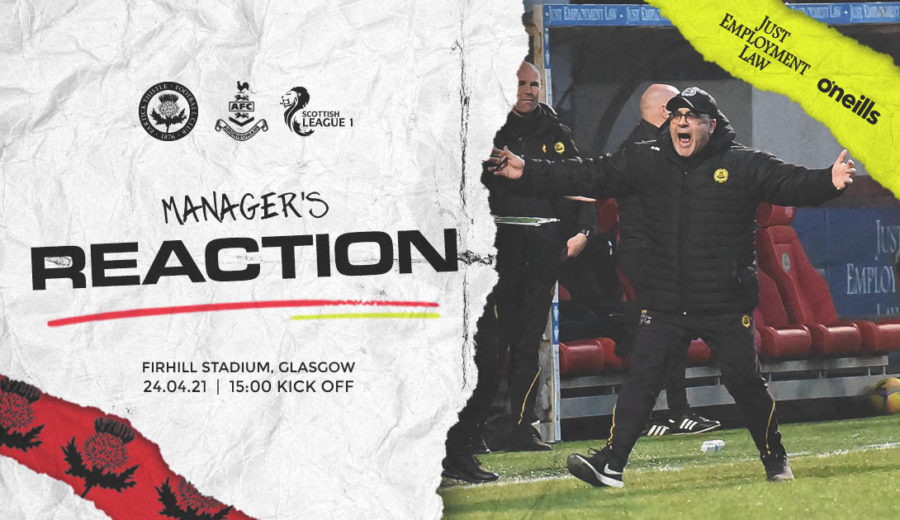 It was a fifth straight win for Partick Thistle this afternoon as they beat Airdrieonians 1-0 at Firhill. The match represented the first post-split fixture for each side with Brian Graham’s strike just after the half hour mark proving to be the winner. The number nine knocked the ball into the net from close range after Shea Gordon’s header crashed off the bar from a Joe Cardle corner. There were chances to double the lead for Zak Rudden and Scott Tiffoney among others but ultimately Thistle’s advantage stayed slim making for a tense end to the contest. The visitors most notable chance saw Callum Gallagher’s shot ricochet off the post in the 94th minute, however, the Maryhill men held on for a big three points. Jags manager Ian McCall spoke to ptfc.co.uk following the end of the match:

“That was a nervy one in the end but it was because we didn’t put it to bed. We should have been three up by half time and their ‘keeper makes a couple of great saves to be fair to him but then Scott Tiffoney has a big opportunity deep into the second half which he should have done better with.

“Because it stayed 1-0, they knew that it would only take one chance and sent just about everyone forward and fired long balls at us which I thought we stood up to well for the most part although that one that came off the post was a bit scary.

“We got there in the end though and it could have been a lot more comfortable but at this stage of the season it’s about getting the three points and we managed to do that.”

The game marked a fifth consecutive clean sheet for the side and McCall expanded on the delight he felt seeing the team keep another shut-out.

“We’ve got good height and that helped us with the long balls and long throw which were constant at the end. They had nothing to lose and even had their ‘keeper up at one point but I was proud of the way we stuck at it and made sure we kept them out.

“Brian Graham was excellent getting back to help out in the air and Brownlie, Bell, Foster and McKenna were all terrific again so I’m glad we’ve got back to our best in defence.”

The Jags have now put together an impressive run of performances and results but the gaffer says everyone understands that there is a lot left to do.

“We’re now totally focused on a huge game away to Cove on Tuesday because a win in that game would go a long way for us. We’re just taking it one game at a time so we’ll use tomorrow to recover and make sure everyone is raring to go for another massive game.”

Stuart Bannigan missed the game after failing a late fitness test and Ross Docherty picked up a knock during the game so Ian gave us an update on the midfield duo.

“Banzo was a big miss today obviously, we’ve had alright luck with injuries since the restart but he just didn’t make it today though we do hope to have him for Tuesday. As for Doc, he took a really sore one on his shoulder in the second half which will need to be evaluated. Of course, they’re the beating heart of our team so hopefully they’re both back soon.”