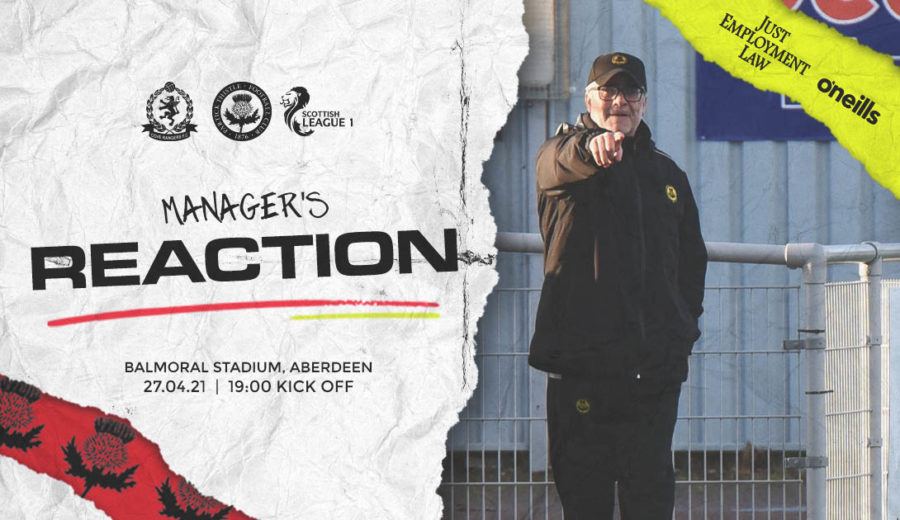 A hotly contested game at Balmoral this evening finished with honours even as Partick Thistle and Cove Rangers drew in Aberdeenshire. Thistle took an early lead through a goal that will need to be looked at by the dubious goals panel with Scott Tiffoney’s free-kick from the left wing making it all the way through to the far corner. Rory McAllister restored parity after 20 minutes from the penalty spot before Ryan Strachan produced a howitzer to put the home side ahead with 15 to play. The Maryhill men managed an equaliser of their own though as Scott Tiffoney grabbed his seventh goal since arriving at the club, rifling a bouncing ball into the net just two minutes after Strachan’s thunderstrike. Late pressure from the visitors almost led to a winner but James Penrice was denied by the woodwork before Ross MacIver’s header was cleared off the line meaning the points were shared. Jags boss Ian McCall spoke to ptfc.co.uk after the final whistle:

“That game could have ended 6-6 to be honest. There were so many chances in that second half and naturally you come away disappointed that we didn’t win but they’re a really good side with great players like Megginson who caused us problems all day long.

“We got ahead early on and Zak Rudden has a chance to make it two which was a tough one but one he’s capable of scoring. Then we let them back into things and it becomes a very even match, I thought.”

After falling behind in the 75th minute, Thistle got back on level terms almost immediately through Scott Tiffoney and McCall says that was key.

“It was a sucker punch for us and it’s in moments like that that you need to show character and we did. Going up and getting that goal so quickly after they’d scored was extremely important because we could have let the heads drop but we didn’t and you could see the spirit of the team with that.”

In the closing stages James Penrice and Ross MacIver went very close to scoring the decisive goal and the gaffer says it became a very open game in the second half.

“I think that the game lacked structure really which probably made it an exciting watch for the neutral but it wasn’t easy viewing for us in the dugout. What an effort it was from James Penrice which we thought was going in before it hit the post and then Ross’ header we thought was in too but, look, it’s a good point at a really tough place.”

The Jags now face Falkirk on Thursday at Firhill which Ian says will be another really difficult game.

“We know what we need to do on Thursday now so we need to recover well from tonight. Falkirk didn’t play tonight so they’ll be relatively fresh but hopefully adrenaline can help carry our boys through. It’s going to be a another big game.”