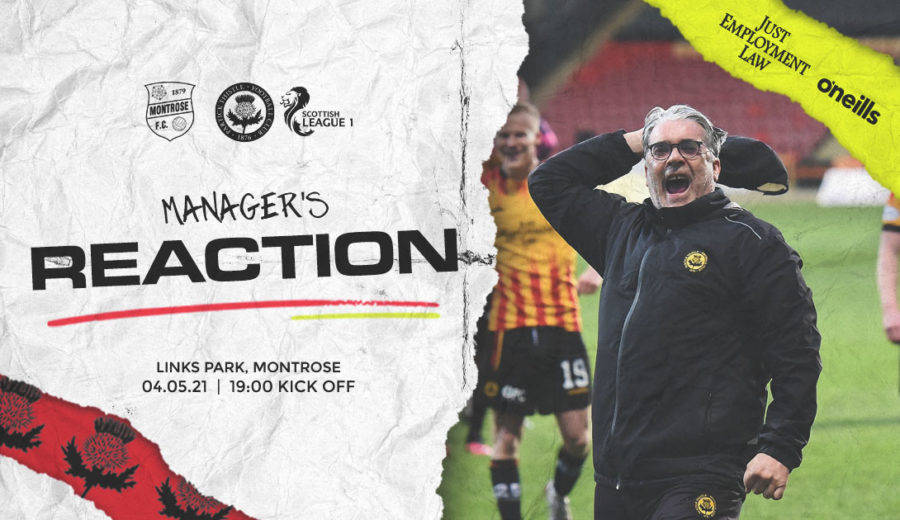 Partick Thistle’s season ended with their first league defeat of 2021 as the Jags lost 3-2 to Montrose at Links Park. A much-changed side fell behind in the first half as Martin Rennie put the hosts in front before Ross MacIver equalised with his second goal for the club. The Gable Endies restored their lead before half-time through Russell McLean but again the Maryhill men fought back with Thistle Weir Youth Academy graduate James Lyon setting up Joe Cardle for another leveller. The killer blow was struck moments from time as McLean set up Cammy F. Ballantyne for a simple finish to send Stewart Petrie into the promotion play-offs at Falkirk’s expense. Jags boss Ian McCall spoke to ptfc.co.uk following the final whistle:

“I was actually pleased with that to be honest. I think at 2-2 we were the team who looked like scoring; hitting the post and the bar and then Connor Murray should have scored with two good chances to do that.

“When we got Zak Rudden and Scott Tiffoney on alongside James Penrice we felt like there was a lot of pace up trop and we did create some dangerous moments. Ultimately, it’s never nice to lose a game but our hard work had already been done.

“We obviously missed the guys who were out but they simply couldn’t have played because of the various knocks they’ve been dealing with so we gave it our all and now we wish Montrose the best of luck in the play-offs.”

One of the standout performers was young James Lyon who set up the second Thistle goal in just his third appearance in senior football.

“There was a lot to like from James and I think he went out there and showed why he’s so highly rated at the club. He showed great composure to pick Joe out for the second equaliser and we were absolutely delighted to be able to give him 45 minutes to go and play.”

“I genuinely believe James has what it takes to make the breakthrough in the Championship next season, he’s a wonderful footballer. He’s got heaps of potential and he’s tied up here so we’re looking forward to seeing more of him.”

The manager finished by reflecting on what has been a wholly unique season at Partick Thistle Football Club.

“It’s been a season like nothing we’ve had before and I doubt we’ll ever have anything like it again. Especially since the restart it’s been truly bizarre and when I think of the way the players have battled and fought through knocks and injuries, I’m very proud of the guys and we finish the season with a title so we look forward to getting the trophy tomorrow.”