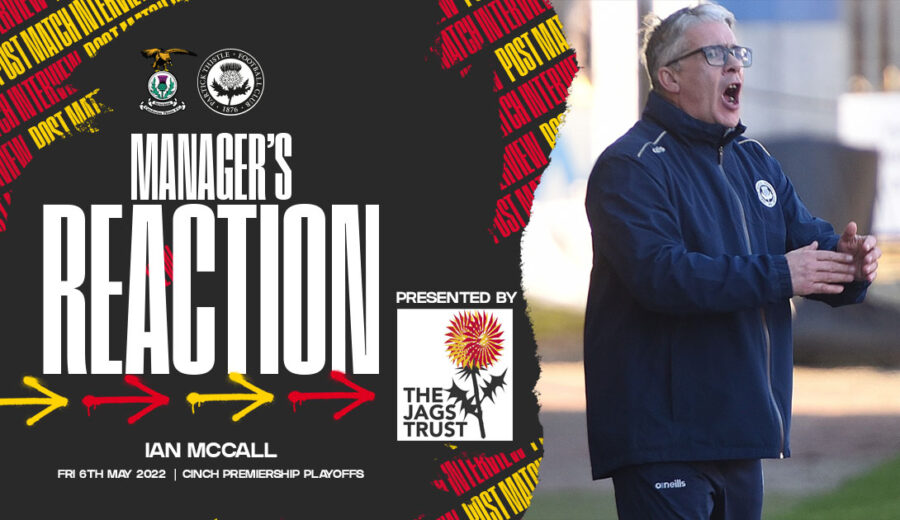 The 2021/22 season came to an end for Partick Thistle this evening as they lost 1-0 to Inverness at the Caledonian Stadium, bowing out of the cinch Premiership play-offs 3-1 on aggregate. The Jags came into the game knowing they needed a win to have any chance of progressing but, despite some good first half chances, an Austin Samuels goal saw them trail going into the break. They threw plenty at it in the second half but couldn’t find a goal to bring them back into things and the home side moved on to the semi-final stage. Thistle boss Ian McCall spoke to ptfc.co.uk after the game:

“It’s really disappointing to go out of course. I felt like there wasn’t much in it over the two legs but they were clinical and we weren’t so we can’t complain. We had probably five or six good chances today which we just didn’t take.

“I thought in the first half we were the better team and I think Billy Dodds would probably admit, having spoken to him, that but then we make a poor mistake through Kevin Holt and gift them the lead. From there, they did the simple stuff well and made it really difficult for us to create more chances.

“Over two legs, we’ve conceded three goals and all three of them we feel were avoidable. Inverness and ourselves are probably pretty well matched overall but when you make the mistakes we made, you can’t expect to get away with them.”

Reflecting on the season as a whole, McCall gave us his candid thoughts on the 2021/22 campaign.

“Well, the first two thirds of the season were good and we felt like everything was moving in the right direction but then the final third of the season wasn’t good enough and ultimately that’s my responsibility.

“I think since we got those two wins against Inverness and Queen of the South we’ve found things a lot more difficult. We’ve missed some important players but even considering that the performances have been sub-par at times.

“Look, we set the target of reaching the play-offs at the start of the season and we’ve achieved that. There’s no doubt that it could have been better especially late in the season but I think it’s been a good season for us.”

Now, the Gaffer looks ahead to next season with preparations already well underway for the 22/23 term.

“We’ve now got to push ourselves and challenge ourselves to be better. I know I’ve got a core of players in that dressing room who can help us go even further and finish higher but there are still areas we need to improve.

“We’ll speak to players over the next week or two and we’ll have to make some tough decisions but that comes with the job. The aim for us is to put together a squad that can improve on what we’ve done this season.”

Ian finished by thanking the Jags fans, both the ones who travelled to Inverness for the second leg and any others who have backed the team this season.

“The fans were great here in Inverness tonight. They were singing all game long and we went over to thank them for that at the end. I think they recognised the effort put in by the team tonight and hopefully they appreciate that the team gave it everything.

“The support of the Thistle fans has been terrific all season long and it means a lot to me and the players. It isn’t always easy but they keep coming back and I look forward to seeing them all again next season.”

A video interview with Thistle manager Ian McCall is available to watch for free now – click here to view it.

We’ll have extended highlights and a full game replay of the fixture on JagZone later.