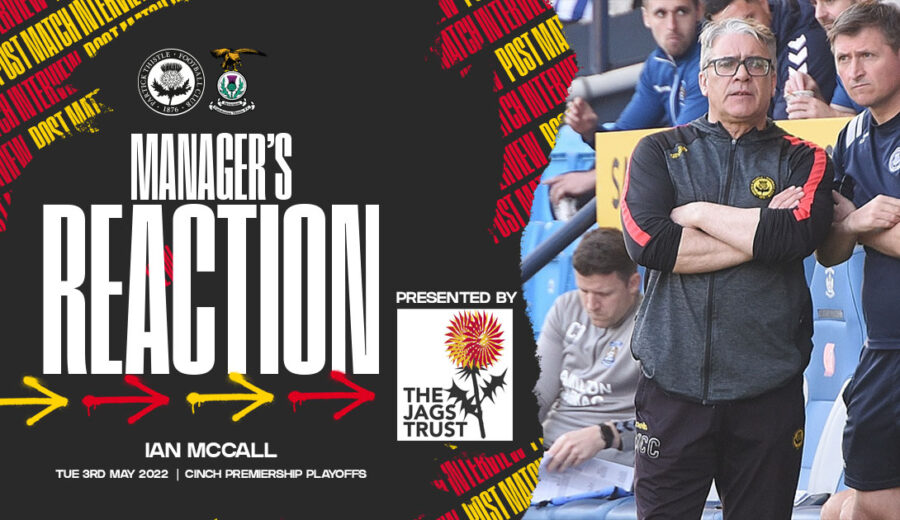 The cinch Premiership play-offs got underway this evening as Partick Thistle took on Inverness in the first leg of the quarter-finals and it was the Caley Jags who took a huge step towards progression in Maryhill. The home side took the lead early in the second half through Robbie Crawford but were pegged back by a Shane Sutherland goal before Austin Samuels completed the turnaround leaving Thistle with all the work to do in the return leg in the Highlands. Jags boss Ian McCall spoke to ptfc.co.uk after the final whistle:

“We felt we shaded that game overall but to be honest there wasn’t much in it. It wasn’t a great game of football and ultimately it was decided by the key moments which went against us tonight.

“There was very little to talk about in the first half and we changed things a bit at half-time to put Alex up next to Brian. We then get that goal and for a while it looked like we were going to dominate but that fizzled out and we concede two poor goals which will make things very difficult for us.”

Looking at the opening goal, the manager said he was pleased with the interplay his players demonstrated to take the lead.

“First of all, Alex battles to make it tough to clear and that gets it to Brian which is the benefit of having them as a two. Then Brian does brilliantly to spot Robbie’s run and get it through to him. We’ve been asking Robbie to get involved more going forward and he made a few good runs today. The finish was really good too and, as I’ve said, at that point there was a chance to push on.”

The visiting Caley Jags struck back in the 71st minute before going in front with eight minutes to play and McCall felt both goals could have been better dealt with.

“For the equaliser, we give Mckay too much space to take the shot and then when the shot does come in Jamie should do better even if it’s just to parry it away from goal.

“The second one comes from a slack pass by Doc but to be fair to them, the cross is brilliant from Sutherland and it lands right on the boy’s toe. These big moments decide ties like these and the defending as we conceded along with the chance that Juan missed were the difference between winning and losing.”

Finally, the gaffer stressed that the tie is far from over and the team have to go to the Caledonian Stadium with the belief that they can turn things around.

“That’s the beauty of a two-legged tie – things didn’t go our way tonight but we have another 90 minutes to try and get through. There’s only one goal in it so we’re still very much in it. It’s disappointing because we feel like at worst we should be going up there level but that’s football and we’ve now got a job to do on Friday night.”