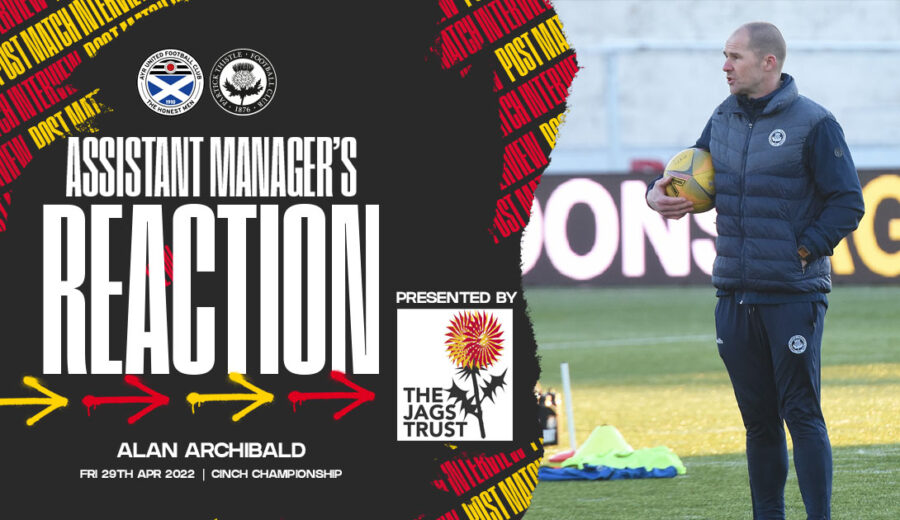 Partick Thistle’s regular cinch Championship season ended in disappointment tonight as they were beaten 3-1 by Ayr United at Somerset Park. Two penalties from Aaron Muirhead either side of a Tomi Adeloye goal earned the Honest Men three points as they secured their Championship status for next season. It wasn’t all doom and gloom for the Jags though with the results of the evening confirming their place in the cinch Premiership promotion play-offs which begin on Tuesday night. Thistle assistant manager Alan Archibald gave his thoughts to ptfc.co.uk following the final whistle:

“We got off to a terrible start and that really set us back tonight. We knew they were going to come out quickly because of what the game meant to them but we just didn’t deal with it well at all. They outfought us during that opening half an hour or so and we deserved to be two down.

“We didn’t deal with their physicality and that allowed them to sort of pen us in our own half for the majority of the first half and that’s not good enough from our point of view. They got their tails up after that and ultimately it was that start to the game which decided things.”

Looking at the manner of the goals conceded in Ayrshire this evening, Archie says they all felt avoidable.

“The thing is, we’ve been better over the last few weeks defensively. We had a spell when we were making silly errors and it was costing us but I think we’d conceded one goal in four coming into tonight so I’m not sure why that crept back into our game.

“The two penalties were ones that were of our own making. The first one Lewis just lunges in when he maybe doesn’t need to and then for the second one Holty tries to play out of a difficult spot at the wrong time and gets punished for it.”

Now, the Maryhill men have four days to prepare for the first leg of their play-off quarter-final against Inverness and Alan says the team have to get tonight’s result and performance out of their system before that game.

“We go into the play-offs knowing what we need to do. Inverness are a good team but we’ve shown we can compete with them in our games this season so we can’t have any fear. Tonight’s result was a bad one but we’ve got to move on from it and get ready for a massive game on Tuesday because it’s going to come around quickly.”

The one bright spot for the Jags on a pretty miserable evening was Alex Jakubiak’s first goal for the club and Archie is hopeful that the striker can now build on that in the play-offs.

“We were all really pleased to see Alex get that goal. He’s performed really well over the past few weeks and his play has warranted more than he’s got so hopefully that gives him a lift.

“It’s something that can just hang over you a little bit the longer it goes on so maybe Alex will play with a bit less pressure on his shoulders now and hopefully he’s got more to come in terms of goals.”

Further reaction from Thistle assistant manager Alan Archibald and captain Ross Docherty will be available to watch on JagZone tonight – log in to view.