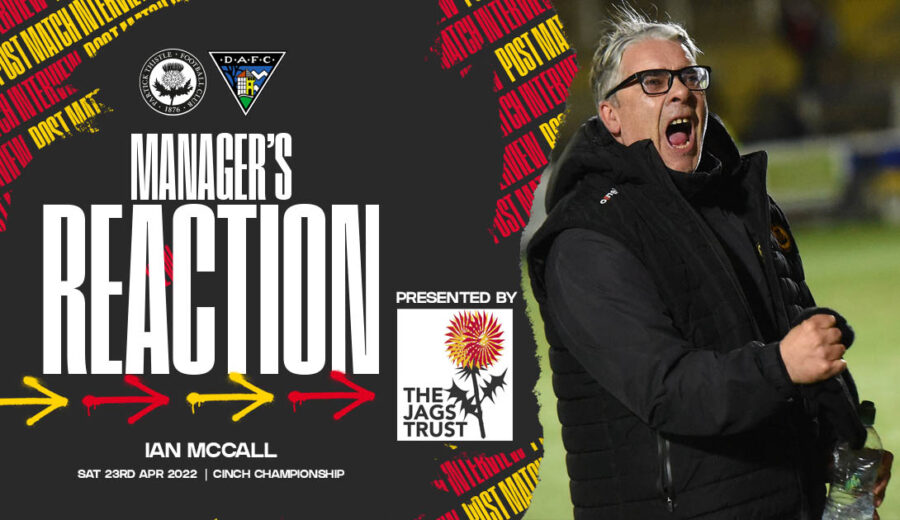 Ross Docherty proved to be the match-winner this afternoon as his 15th minute strike earned Partick Thistle earned a crucial three points against Dunfermline Athletic at Firhill. The win means that the Jags will be in the promotion play-offs barring a huge goal swing in Raith’s favour on the final day of the season. Brian Graham, Scott Tiffoney and Alex Jakubiak all had chances over the course of the 90 minutes but they couldn’t convert meaning the home side had to defend stoutly to fight off late Dunfermline pressure and claim the three points. Thistle manager Ian McCall spoke to ptfc.co.uk after the game:

“It was another game which wasn’t very easy on the eye but I thought we thoroughly deserved the win. We started the game well and got in front through Ross Docherty’s goal and could have potentially been further ahead.

“Dunfermline threw plenty at us in that second half and they were playing with four or even five up front at times so we really had to work for it late on. Last week we conceded a costly goal late on but we did a good job of limiting the chances they had on goal as we saw it out today.”

The gaffer had particular praise for the goalscorer Ross Docherty who netted his seventh goal of the season and his fourth against Dunfermline to decide the contest.

“Doc took his goal brilliantly and the delivery was effective from Kyle Turner. I thought Doc’s overall performance was fantastic too and he was so important to the way we defended in the second half. He put in tackles, won headers and kept taking the pressure off the defence which was invaluable.”

Scott Tiffoney came off at half-time as Robbie Crawford replaced the winger and the manager explained that change of personnel.

“Tiff was struggling a bit with a muscle problem. He had to do a fitness test a couple of hours before the game and we could see from his numbers in the first half that he wasn’t his usual self so we felt it was better to bring Robbie on. Now we’ll assess him next week and hopefully he’ll be ready for Friday, and if not then the Tuesday after that.”

The victory all but confirms Thistle’s place in the cinch Premiership play-offs and McCall feels his side have warranted fourth place this season.

“We know it’s not technically done yet but it would take something incredible to miss out. At the start of the season we were aiming for the top four and to be this close to reaching that is a great feeling. It hasn’t been straightforward; it’s been a bit up and down at times but I think we’ve deserved it based on what we’ve done this season.

“We now go to Ayr next week with a bit of pressure off and we might rest a player or two but we still want to go and win that game. It would be ideal if we can go into the play-offs on a positive note so that’s the aim next week.”

Further reaction from Thistle manager Ian McCall and captain Ross Docherty will be available to watch on JagZone tonight – log in to view.