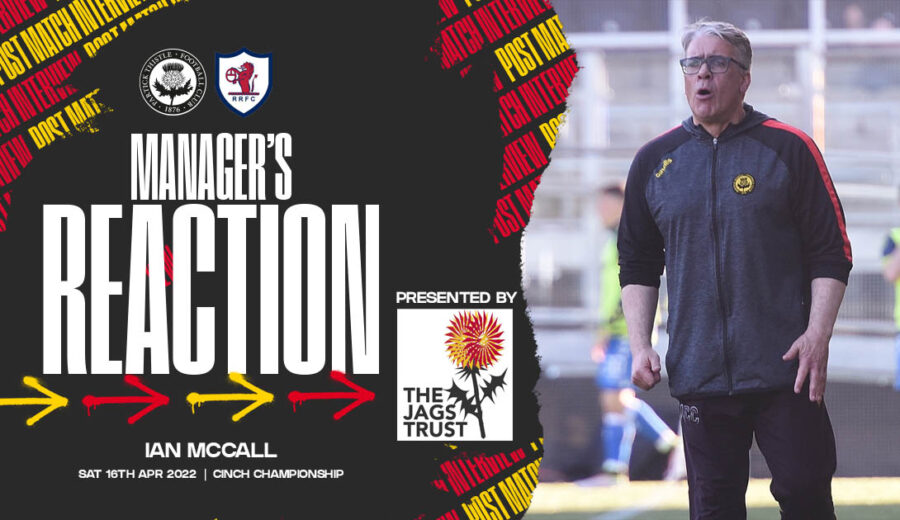 Raith Rovers gained some ground in the cinch Championship play-off race as they won late at Firhill this afternoon against Partick Thistle. A goal from Matej Poplatnik in the 90th minute settled the game in Glasgow as the Kirkcaldy side pulled to within three points of the Jags with two games to play. Chances came and went for Stephen Hendrie, Brian Graham, Juan Alegria and more but Thistle were unable to take any of them before the away side scored late on to take the points back to Fife. Jags boss Ian McCall spoke to ptfc.co.uk after the final whistle:

“Well, it’s a gutting way to lose a game especially when we felt we should never have lost it. If anyone shaded it then I felt we did but ultimately if you don’t take your chances then you’re in danger of losing like that.

“We felt we had the better of the first half and had two or three decent chances to score which we didn’t take. Things were a lot more even in the second half and both teams were pushing and creating openings without the goalkeepers having too much to do.

“Juan, who I thought did well when he came on, should score the chance he has with about ten minutes to go but then they go up the other end and started putting pressure on us. Their goal is well-worked from their perspective but we should let the ball come in like that so easily. Now, we have to regroup because we’re still in the driving seat.”

McCall made a change at half-time with Robbie Crawford replacing Tunji Akinola and he talked us through that alteration.

“We didn’t feel like we were getting enough out of Ross Docherty and Stuart Bannigan with Mayo in behind them. Tunji played pretty well in the first half but was just the victim of us wanting to change the approach a little bit.

“Moving things about like we did probably lead to things being a bit more open but we wanted to try to get a bit more control of the midfield though it didn’t really pan out like that.”

The Maryhill men now look forward to a home fixture against Dunfermline Athletic and the gaffer is hoping his players don’t dwell on today’s defeat for long.

“As I said, we’re still in the driving seat and it’s still all in our hands. We’ll be back in on Monday and we’ll need the boys to put it behind them. Things didn’t go our way today but we’ve got two more games to go and get this play-off spot so that’s the aim.

“It’ll be a difficult game against a Dunfermline side who will be desperate for the points but we really need to win as well so we have to regroup and get ourselves in the right frame of mind for that match.”