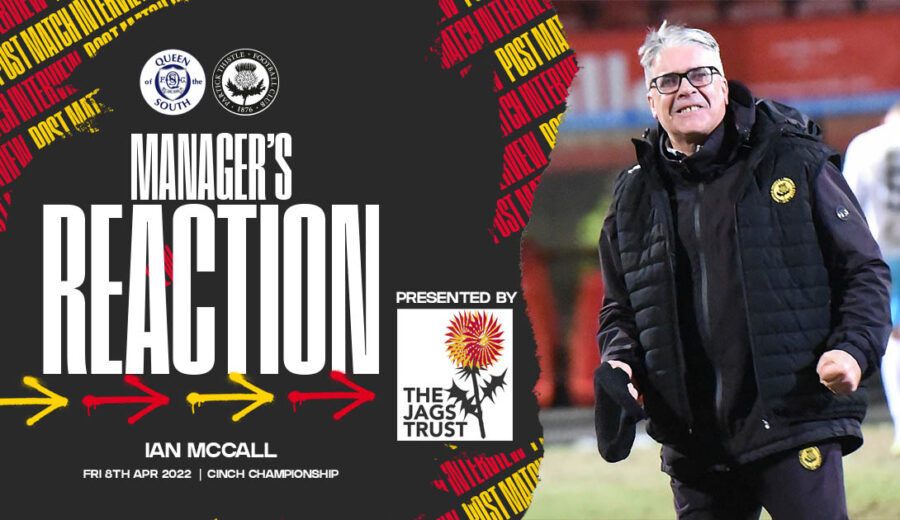 Partick Thistle returned to winning ways this evening as they beat Queen of the South 1-0 at Palmerston Park in the cinch Championship. A goal from Scott Tiffoney on the hour mark decided the game as he latched on to a Brian Graham lay off before advancing into the Queens box and slotting past Joshua Rae. The win moves Thistle six points clear of Raith Rovers in fifth ahead of the rest of the division’s games tomorrow. Thistle boss Ian McCall spoke to ptfc.co.uk after the match:

“It feels great to get that winning feeling back but it wasn’t a brilliant performance to be honest. I felt Queens were actually the better team and probably deserved to win based on the chances they created.

“That being said, at this stage of the season it’s all about points and we’re delighted to get three more on the board tonight. We’ve got a lot more than that to offer in terms of performance but we’ll take the win every day of the week.

“It’s been a tough few weeks but we’re hoping that now we’ve got guys back we can get back to winning games at just the right time and tonight was a start.”

The gaffer went on to expand on his thoughts about how the home side put his team under pressure.

“They were energetic and didn’t give us much space to play at all. Obviously, they’re fighting for their lives at the moment so we expected them to attack but we didn’t really deal with it how we’d have liked.

“We needed Jamie a couple of times in that first half and then they came out lightning quick for the second half. For those 10 or 15 minutes it was pretty much one way traffic but thankfully we hung on through that spell.

Thistle got their goal after 60 minutes as Scott Tiffoney got his name back on the scoresheet and the manager thought the goal helped his team settle.

“It had been such a frantic start to the second half that we hadn’t really had a chance to just gather ourselves but then we hit them on the break and score and it probably came at the perfect time.

“The goal itself was great play from Brian and Tiff does really well to carry it from the half-way line and then finish like that. That just shows you what we’ve been missing when those two guys have been missing.

“After that, we felt comfortable. The goal just calmed us down and we got back to defending as a unit and keeping them in front of us. Towards the end of the game we didn’t really feel under pressure which was a complete switch from the start of the second half.”

Alex Jakubiak made his return to the team at half-time and McCall says he’s expecting the striker to play an important role for the remainder of the season.

“We’re really happy to see Alex back because we think he and Brian make a really good pair. He offers a bit of a different threat with his pace which just opens things up a lot more.

“We brought him on tonight because we wanted to get more bodies around Brian and they worked well together. Once we had the lead they both worked their socks off to press Queens and hold the ball up when they could.”

Finally, the manager praised the travelling Thistle support who made their voices heard throughout tonight’s match.

“They were fantastic all game long, I thought. We didn’t exactly give them much to cheer about but they were singing from start to finish. It’s been a difficult few weeks for everyone at the club but we hope they enjoyed that result.”

Further reaction from Thistle manager Ian McCall and Jamie Sneddon will be available to watch on JagZone tonight – log in to view.