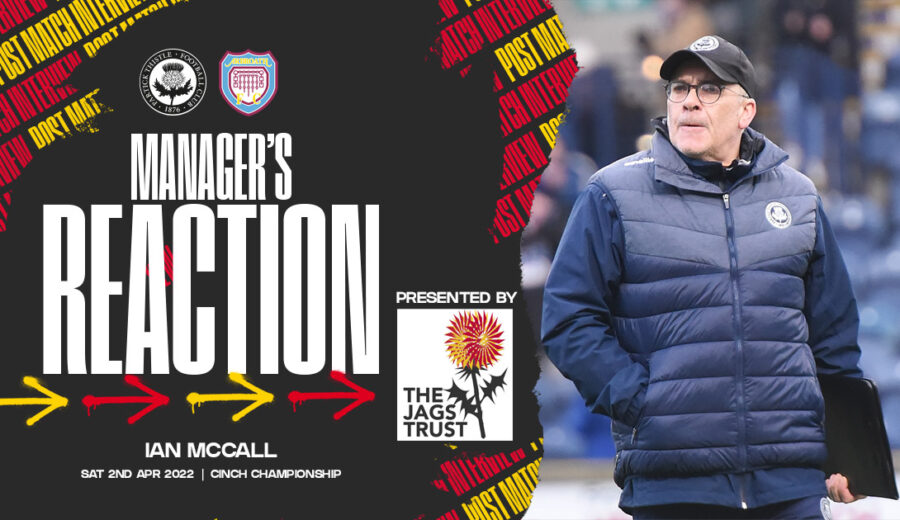 Partick Thistle got their April started with a battling 0-0 draw against Arbroath in the cinch Championship at Firhill today. The Jags came into the game off the back of four consecutive defeats but managed to stop the rot as they held the Smokies in a tightly contested game. The away side’s best chance of the game came in the first half as David Gold struck the post from the edge of the box while Thistle’s closest moments came in the air as Brian Graham saw a header saved by Derek Gaston and Kevin Holt powered one over the bar from eight yards out. Jags boss Ian McCall spoke to ptfc.co.uk after the game:

“There wasn’t too much in that game in all honesty but I did think that if anyone deserved to win, it was us. Brian’s had two or three decent chances with the best one being saved well by Gaston but then Holty also has a good one which on another day might go in.

“Overall, we’re pleased to get a point on the board because we’re up against a good Arbroath team who have a lot of quality and don’t lose often. Last time we played them here they were all over us and deserved to win but we didn’t let that happen this afternoon which was great.”

After a tricky defensive run, Thistle got back to keeping a clean sheet against Dick Campbell’s side and the gaffer was happy with the organisation the team showed against the league’s joint-top scorers.

“It’s something that had to improve and we’d already shown this season that we’re capable of being a really good defensive team but, for whatever reason, we went back to making silly mistakes over the past few weeks.

“Today it was much better and I thought the back four were really solid. Jamie wasn’t given much to do and that’s credit to the work of the guys in front of him which includes Lewis Mayo. He was playing in midfield which isn’t his natural position and he was the best player on the park in my opinion.”

Brian Graham was making his return from illness as he played around 85 minutes of today’s game and McCall was delighted to see the number nine back out on the pitch.

“Brian’s efforts today were incredible. He really has been struggling and it’s limited his training massively but he said to us that he wants to play and that’s just what he’s like. We’ve obviously missed him in the games that he’s missed but to be able to get him back was huge albeit he wasn’t playing at 100%.”

Now, the Maryhill men prepare for a trip to Dumfries next Friday night to face Queen of the South and the manager says the team have to go there with a positive attitude.

“We now need to go and improve again against Queens. Drawing against Arbroath will be a good point if we can go and add three more on Friday but we know that won’t be easy. We are hopeful that we’ll see a couple of the guys who were missing today back and we’ll get more training into the legs of the guys who’ve missed time which means we’ll hopefully be going to Palmerston Park in good shape.”

Further reaction from Thistle manager Ian McCall and Tunji Akinola will be available to watch on JagZone tonight – log in to view.