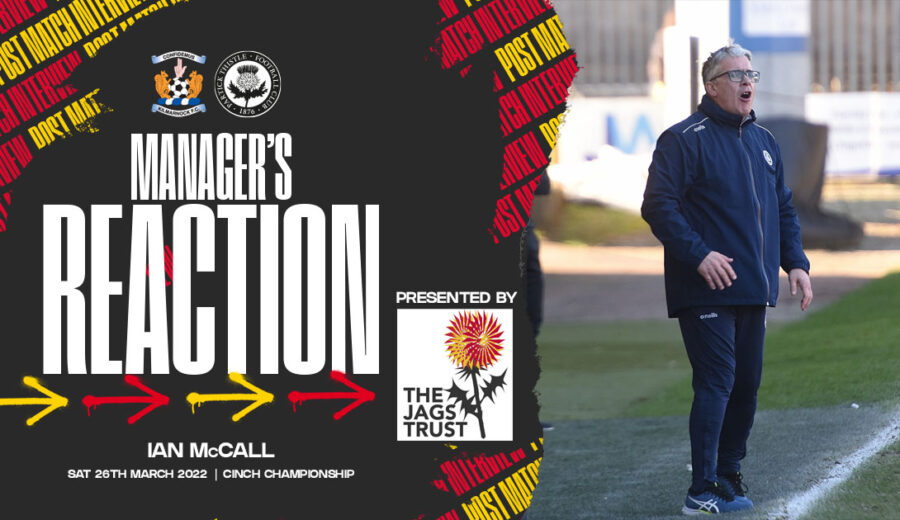 Partick Thistle made the trip to Ayrshire to face cinch Championship leaders Kilmarnock in the final game of March. Two moments of quality from Kilmarnock hitman Kyle Lafferty saw Killie lead by two goals before the Jags grabbed a consolation when Connor Murray bundled home from a Thistle corner kick. Despite a late rally, the points remained at Rugby Park with Thistle remaining two points clear of Raith Rovers in fourth position. Ian McCall caught up with ptfc.co.uk shortly after the full time whistle.

“I was really, really proud of the players today. There are ways to get beat and today they gave absolutely everything. On another day one of those late crosses drops right to us and we head up the road with a draw. I hope today’s performance gives the players a bit of confidence because it was a massive improvement from the last couple of games and we now look ahead to another massive game against Arbroath at Firhill.”

Thistle gave as good as they got throughout the encounter and the Jags gaffer didn’t feel the scoreline at the half time interval reflected the first half proceedings.

“I felt we were very unlucky to be losing at half time. I didn’t think there was much in the game and maybe we shaded it but it is terrific quality from the free kick which gives Kilmarnock the lead. Kyle Lafferty has that in his locker and it’s a moment where you have to put your hands up and appreciate the quality.

“Then 30 seconds into the second half they get a second goal. It was a good goal from a Kilmarnock perspective but from us it was really, really poor. We gave away possession cheaply and they punished for it and I think that gave us a little bit of shock. I thought we weathered the storm in the 20 minutes after that goal really well but we stayed strong and got a goal back. I just wish we had scored it about 10 minutes earlier because that would have made it quite interesting. The ball just didn’t drop for us in the box.”

With five games to go Thistle remain in the promotion play-off hunt with tough fixtures ahead and the gaffer is looking ahead to April with optimism.

“We’ve had a really hard schedule over the last six weeks or so and we’ll now play once a week – like everyone else – for the rest of the season. We were missing a lot of players today and hopefully we can get three or four of them back for next week’s game. We’ll have a full week of training which will give us the chance to prepare and make sure we work on their loads and make sure we are ready for Saturday. We’ve got to win some matches, that’s pretty obvious, but we’re right in this and it’ll go right to the wire.”