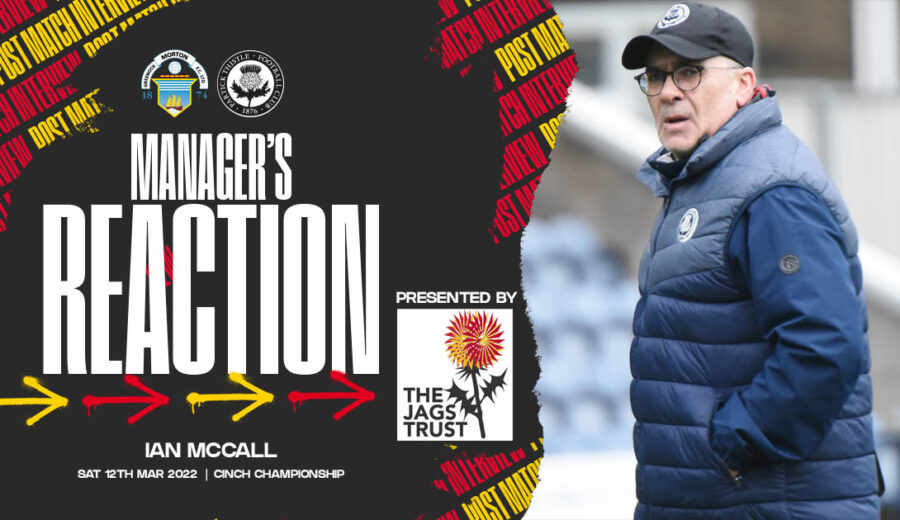 Partick Thistle suffered their second league defeat of 2022 this afternoon as they were beaten 2-1 by Greenock Morton at Cappielow. The Jags started the game well with Kyle Turner putting them a goal to the good in the opening stages but second half strikes from Gavin Reilly and Robbie Muirhead turned the match on its head and secured three points for the home side. Thistle boss Ian McCall spoke to ptfc.co.uk following the final whistle:

“That was absolutely gutting for us. If I’m completely honest the boys looked really tired in that second half. They’ve put so much into the last two games and again in the first half today but after the hour mark we struggled today.

“To lead the game so early and then lose is tough to take. As I say, it wasn’t for a lack of effort but four or five of our key players were looking a big leggy towards the end of the game.”

The Jags conceded twice in the final 15 minutes and the manager said the manner of the goals they let in was frustrating.

“Both goals come from floated balls forward and we just don’t deal with them. With the first one Jamie makes a great save and they get a bit of luck with the way it bounces back to them but then the second one is far too easy.

“At this point in the season, it comes down to key moments and we didn’t do well enough in the key moments today. We didn’t deserve to win after that second half but we should have made sure we got a point at least.”

Now Thistle have a full week to prepare for their next fixture and McCall says the midweek without a game comes at the right time.

“As I mentioned, there are a few players who were tired at the end of the game there because of the amount of football they’ve played and the effort they’ve put in over the past few games. Now we’ve got a bit of time to recover which we need to use properly to make sure we’re ready again next Saturday.”

Thistle’s next port of call is a cinch Championship match against Hamilton Accies at Firhill and the gaffer says the team need to get back on track.

“We felt like we were moving in the right direction but this is a setback for us. There’s still a lot of football to be played and plenty of points to be won though so the focus for us now is bouncing back against Accies.”