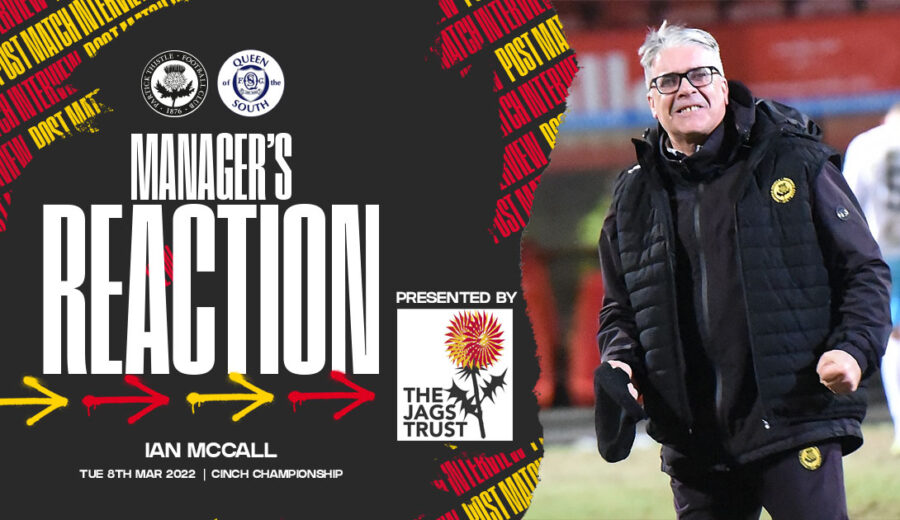 A familiar tune rang around the stands at Firhill at the end of tonight’s game against Queen of the South as the indestructible Kevin Holt produced another match-winning moment for Partick Thistle. The number three stepped up to take an 80th minute penalty to win the game after Cammy Smith had been dragged to the ground in the Doonhamers’ box. The Jags were able to see it out to take them within six points of the Championship summit with a game in hand on the two teams above them. Jags manager Ian McCall spoke to ptfc.co.uk after the game:

“That was a massive win for us but it really should have been more than 1-0. I think both teams started the game slowly but after half-time we really turned things up a notch and we created a few really good chances.

“Everyone knows it isn’t easy on that pitch at the moment but we kept pushing and pushing and deserved the three points at the end of the game.”

After a tepid first 45 minutes the manager made a couple of half-time changes and he says he was pleased with the impact they made.

“We brought on Brian Graham and Cammy Smith to serve specific roles. Juan and Connor weren’t bad in the first half but we wanted a focal point like Brian and someone who could run in behind like Cammy.

“I think you saw the ball stick up front a bit more with Brian on the park and Cammy got involved with plenty of the play including winning us the penalty so it was good to see them having that impact. We also had Kyle Turner come off the bench and he was very active in that second half too and at this stage of the season you need the full squad so that was good to see.”

For the second consecutive game it was Kevin Holt who popped up with the key moment as he struck an 80th minute penalty past Josh Rae to secure the victory and McCall was full of praise for the Thistle hero.

“He’s done absolutely brilliantly for us this season and these last two games have only highlighted his importance. I mean, just looking at his defensive work, he’s slotted back into central defence seamlessly and has helped us to a couple of big clean sheets.

“You then look at his two goals and they’re both very impressive in different ways. The one against Inverness is just great technique on his weaker foot and then the one tonight requires a lot of bravery and bottle and he stuck it away confidently.”

Now the team move their attentions to a trip to Cappielow to face Greenock Morton which the gaffer knows will be another vitally important game.

“We’ve built a little bit of momentum with these two wins after a few games without a win so we can’t let that fizzle out. Morton are another one of those teams who have improved a lot over the past few months and they beat us at Firhill not too long ago so we know it will be really tough.”

Further reaction from Thistle manager Ian McCall and Kevin Holt will be available to watch on JagZone tonight – log in to view.