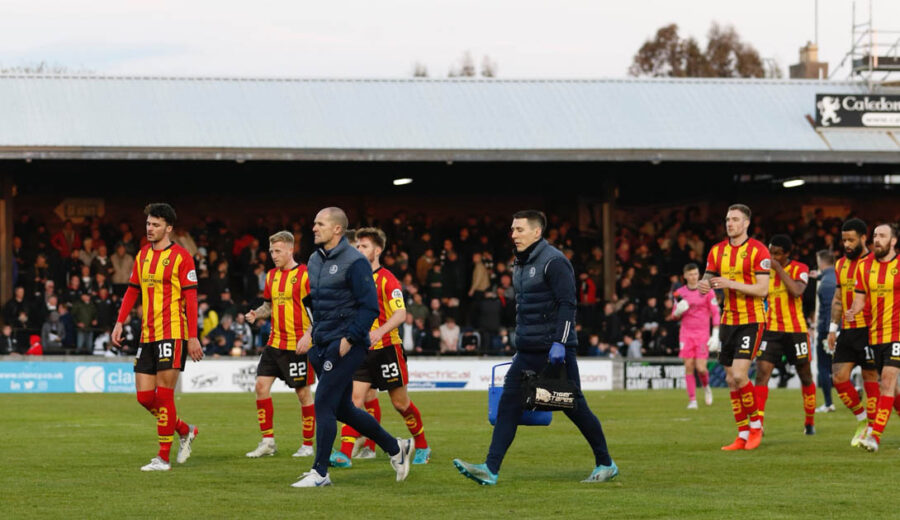 The regular cinch Championship ended for Partick Thistle as they travelled to face Ayr United at Somerset Park in a game that had play-off implications at both ends of the table.

Thistle went into the game knowing that they would secure a top four spot barring an unbelievable set of results in Raith Rovers’ favour while the home side knew that a win would see them avoid the relegation play-offs irrespective of Dunfermline’s result against Queen of the South elsewhere.

Five changes were made to the Thistle side which started against Dunfermline the previous week with Scott Tiffoney and Brian Graham missing out completely while Kevin Holt, Stephen Hendrie and Stuart Bannigan dropping to the bench. The five players who took their places were Tunji Akinola, Richard Foster, Robbie Crawford, Cammy Smith and Kyle McAllister.

The Jags were yet to concede a goal against Ayr United in three meetings this season but that record was quickly put right by the Honest Men when they took the lead after just six minutes. A low ball into the box landed at the feet of Tomi Adeloye and Lewis Mayo stepped in looking to dispossess Ayr’s top scorer only to clatter into the Englishman and give away a spot kick. It was former Jag Aaron Muirhead who stepped up to take the penalty and he slammed it past Jamie Sneddon confidently, going down the middle as the goalkeeper went to the side.

The Honest Men could have been two to the good 10 minutes later when an Ayr corner caused the visitors all manner of problems. A ball into the six-yard box was forced away from goal by Jamie Sneddon but only as far as Aaron Muirhead who flicked the ball back towards the target as he sought his second goal of the game. His effort was looping towards the top corner but Sneddon was able to touch it over the bar with a smart save.

The hosts wouldn’t have to wait long for a second goal though and on the half hour mark they found the back of the net again. A Kerr McInroy free-kick from the Ayr left landed on the head of Tomi Adeloye and the former Barnet striker directed the ball towards goal. His attempt was very central but Jamie Sneddon couldn’t handle it and it squeezed past the Thistle number one to double the home side’s advantage.

It wasn’t until the second half that Thistle created their first real opportunity of the game through Kevin Holt. The defender, who came on as a first half substitute for the injured Kyle McAllister, got on the end of a Stephen Hendrie cross to volley goalwards but Aidan McAdams was on hand to make the save. It fell back to Holt who tried to force the ball home with a header but McAdams was on hand again to deny him before Sean McGinty cleared.

Any hopes that those chances would spark a red and yellow comeback were quashed three minutes later when Ayr won their second penalty of the game. A chipped ball forward was not dealt with by Kevin Holt and Tomi Adeloye took the ball from the number three. Holt then tried to make amends for his error with a tackle but only caught the man as for the second time in the game, Adeloye was fouled for a penalty kick. Muirhead stepped up again and sent Jamie Sneddon the wrong way to hammer home the hosts’ advantage.

There would be a consolation for the Jags as Alex Jakubiak found the back of the net for the first time as a Thistle player. The Dundee loanee received the ball from Stuart Bannigan just inside the Ayr box and quickly shifted onto his right foot, rifling a shot towards goal. McAdams couldn’t react quickly enough to the powerful drive and it flew into the far corner to make it 3-1.

That was how the game finished with Ayr confirming their place in next season’s Championship while the Jags’ play-off spot was secured courtesy of Raith’s failure to beat Kilmarnock at Stark’s Park.

Next up for Ian McCall’s side will be the first leg of their promotion play-off quarter-final against Inverness at Firhill. That one is a 7:05pm kick-off on Tuesday, 3rd May.