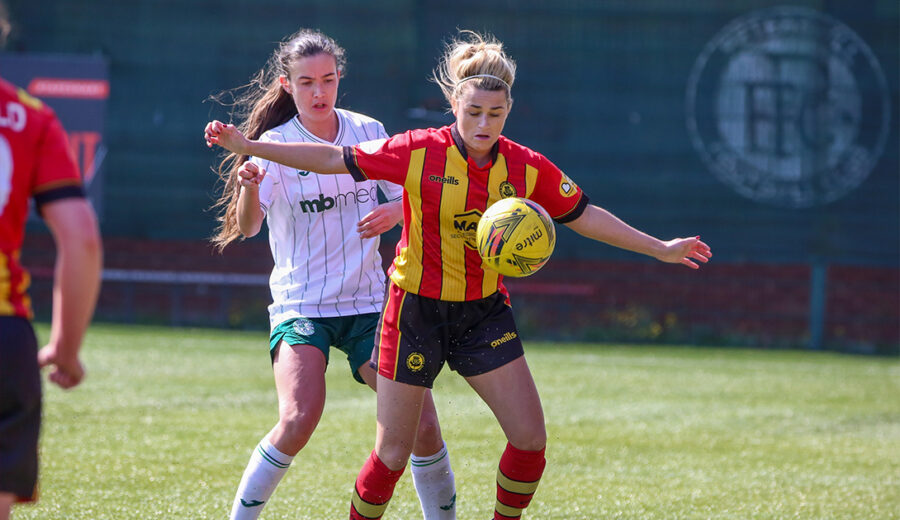 It was a Biffa Scottish Cup quarter-final rematch on Sunday as Thistle took on Hibernian for the fourth time this season.

The Jags had enjoyed two enthralling victories over the Hibees in the sides’ previous Petershill Park meetings, however, it wasn’t to be this time around as Dean Gibson’s side took a 2-0 win.

The script could have been very different though if Thistle had stuck away the chance they created after three minutes. An Amy Bulloch free-kick from just inside the Hibs half found the run of Cheryl McCulloch at the back post, however, the defender couldn’t keep her header down and repeat her goalscoring heroics of the quarter-final.

As the first half went on, the much-changed home side struggled to find a rhythm while Hibs pushed for an opener which they would get after 12 minutes. It came from a corner kick which landed perfectly on the head of Michaela McAlonie at the back post. The midfielder found herself unmarked and was able to direct a header into the net despite Lauren Grant’s best efforts.

A second goal would follow 15 minutes later as the side from the capital took advantage of Thistle’s underperformance. It was another set piece that caused Thistle problems as an Ellis Notley free-kick was only cleared as far as Shannon Leishman 25 yards from goal. The number two controlled with one touch before volleying a shot towards goal which squeezed in at the near post.

It very well could have been three before the break as Hibs won the ball back in the Jags’ half and went for the jugular. The ball was played to Amy Gallacher on the right side of the box and she fed it across to Colette Cavanagh. It seemed it was going to be an easy finish for the winger from around six yards out but Lauren Grant produced a magnificent save to keep the ball out and preserve Thistle’s hopes of taking anything from the game.

Those hopes were almost given a huge boost when Rachel Donaldson came very close to pulling a goal back 10 minutes into the second half. She did brilliantly to control a long ball forward and manoeuvre away from her marker before trying to curl a shot into the top left-hand corner of the goal. Unfortunately, the former Stirling University player’s attempt went just the wrong side of the post.

Despite a much-improved team display in the second half from Brian Graham’s team, there weren’t many chances to be had beyond that Donaldson effort. In the final five minutes of the game the ball dropped to Rosie Slater 30 yards from goal and she fired a low volley towards goal which was saved easily and proved to be the Jags’ last sight of goal in the game with Hibs taking all three points.