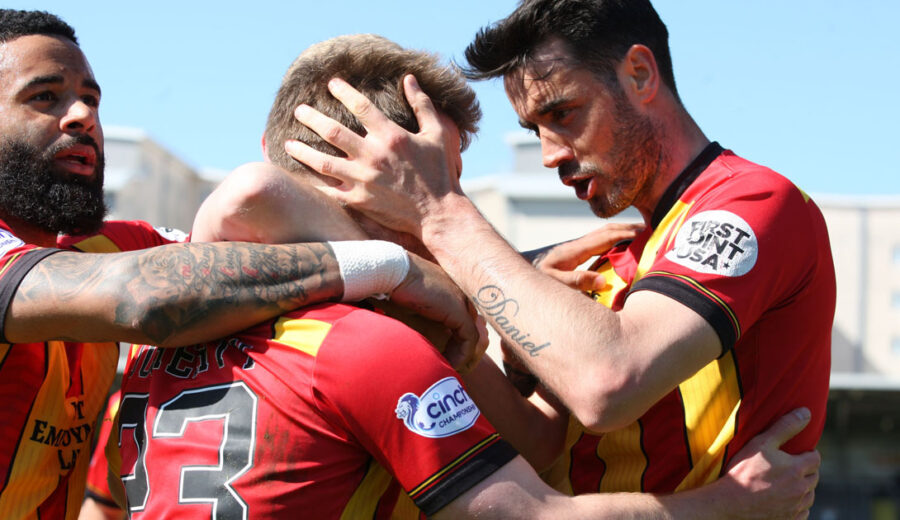 For the second week in a row Partick Thistle had the chance to secure a spot in the cinch Premiership play-offs as Dunfermline visited Firhill this afternoon.

The Jags missed the chance to confirm a fourth place finish a week ago as Raith won late in Maryhill but they came into a clash with the Pars knowing that even if Raith win, a win of their own would all but book their play-off spot due to their superior goal difference.

Ian McCall made one change to the side which lost to Raith with Tunji Akinola being replaced by Kyle Turner meaning a return to central defence for Lewis Mayo who had started in midfield the previous weekend. Scott Tiffoney passed a late fitness test to take his place on the left wing while Richard Foster was back in the squad after injury, taking a place on the bench.

The Jags came into this game having failed to score in their previous three home games, however, they showed plenty of attacking zeal from the off today with Brian Graham going very close in the 12th minute. Ross Docherty managed to force the ball towards Graham after a battle at the edge of the Pars box and the big striker managed to wriggle past his marker for a clear shot at goal. Polish goalkeeper Jakub Stolarczyk was out quickly though and was able to block Graham’s effort with his legs.

The home side didn’t have to wait too much longer for the opener though as Ross Docherty struck with 15 minutes on the clock. It came from a Kyle Turner corner as he spotted Docherty’s run to the front post and picked out the captain who flicked the ball goalwards with the outside of his boot. Stolarczyk had started moving across to his near post but couldn’t do enough to keep the ball out as Docherty recorded his fourth goal of the season against Dunfermline.

Just two minutes later there was nearly a second goal for the Maryhill men as Alex Jakubiak worked his way down the right before picking out Brian Graham with a cross. The striker couldn’t control quickly enough to shoot but was able to lay it off for Scott Tiffoney who fired a shot narrowly wide of the target.

The chances then dried up for both teams with Dunfermline controlling more of the possession without posing a serious threat on the Thistle goal and, as such, it was a Thistle mistake which presented them with their first real opening of the game. A bouncing ball and a bit of miscommunication led to Jamie Sneddon and Kevin Holt getting in each other’s way as they sought to make a clearance. Consequently, the ball fell to Lewis McCann with Jamie Sneddon well out of position but Stephen Hendrie was across quickly to make a goal-saving block.

Coming out for the second half, Thistle had the first clear sight of goal. It came following a Ross Docherty shot from 20 yards out which Jakub Stolarczyk parried down towards Alex Jakubiak. The Englishman took the shot on first time with his left foot but sent his effort high over the bar.

Then the game settled into a similar pattern as the first half – a good amount of possession for the away side but without much end-product. In fact, the only other notable effort on goal of the second half came from the hosts in the 83rd minute. Brian Graham got the ball on the left flank and took on Efe Ambrose, getting past the former Celtic man. Graham then tried a right-footed shot from the edge of the box which flew comfortably over the target.

So despite throwing plenty at Thistle, including a four up front formation, Dunfermline weren’t able to trouble Jamie Sneddon much less find an equaliser meaning the Jags claimed all three points.

With Raith winning elsewhere, that means Thistle are three points ahead of the Kirkcaldy side going into the final day with a goal difference which is eight goals better than them. Ian McCall’s men face Ayr United in the regular season finale which is a 7:45pm kick-off at Somerset Park on Friday night.