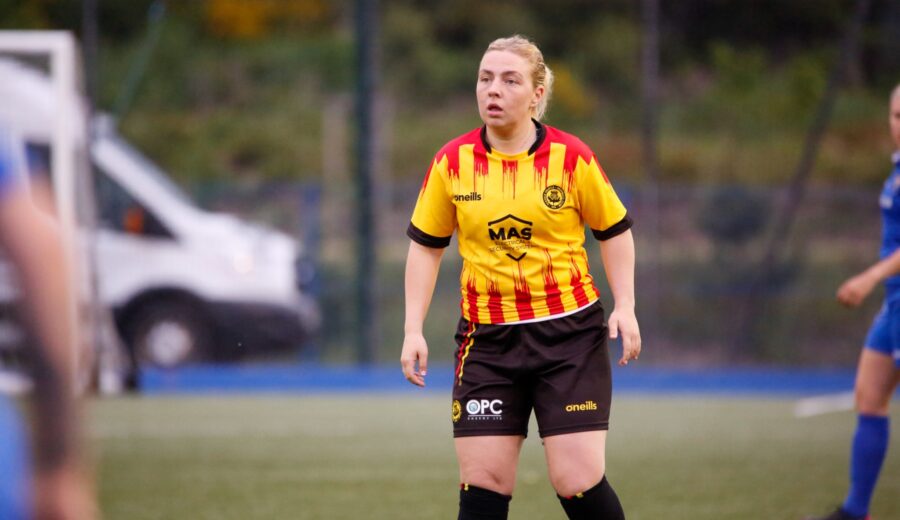 The SWPL 2 season concluded for Partick Thistle Women’s FC this afternoon as they took on Dundee United WFC at the Dundee International Sports Complex. The Jags went into the game with a chance of promotion if second placed Hamilton dropped points against Kilmarnock.

The first big opportunity of the game fell to the visitors with Colette Fleming almost breaking the deadlock with three minutes. The Thistle captain took aim with a free kick from 30 yards but her strike bounced off the crossbar and over.

The Jags continued to probe in the opening stages but struggled to create obvious openings. Clare Docherty had the best chance during a spell of Thistle dominance when Sophie Gallacher found her with a low cross but she wasn’t able to direct a shot on target.

More half-chances followed for Brian Graham’s team but Dundee United went closest in the last moments of the first half as Demi Falconer’s headed clearance fell to Danni McGinley, however, the number 11’s volley was slightly too high.

The scoring eventually began on 52 minutes when the home side hit the front. SWPL 2 Player of the Year nominee Robyn Smith picked up the ball 20 yards from goal and fired goalwards, beating Anna Vincenti with a powerful drive.

The Jags responded well and retook control of the game after falling behind. Clare Docherty, who was also nominate for the divisional Player of the Year award, almost restored parity with a header but the United goalkeeper, Meach, made a terrific save to deny her.

The away side would get their leveller though from the resulting corner. Cara McBrearty curled the ball into the six-yard box and her delivery evaded everyone including the goalkeeper to find the back of the net.

Suddenly both teams were pushing for a goal again and it was the home side who went in front for the second time in the match. After Demi Falconer was penalised for a handball at the edge of the box, McGinley stepped up for United and drilled a well-placed effort into the bottom corner of the goal.

Now Thistle were chasing the game again and they set up a siege of the United half. Gallon, Fleming and Craig had sights of goal but another equaliser wasn’t forthcoming. Docherty almost added to her team-high goal tally as she broke down the right flank but Meach was on hand to deny the number eight once again.

The odd United counter broke up consistent spells of red and yellow pressure but the Thistle defence stood strong when called upon.
The visitors’ efforts were finally rewarded in the 90th minute when Cara McBrearty caused more mayhem with a corner. Her left-footed in-swinger had home players scrambling and it ended up in the back of the net again, seemingly without a touch from one of her teammates.

The game finished 2-2 with neither side getting the coveted victory, however, it was redundant in the end anyway as Hamilton did the business against Kilmarnock to secure promotion to the SWPL 1.

What was important, though, was the Jags’ equaliser which meant they finished the season in third place above United rather than in fourth.