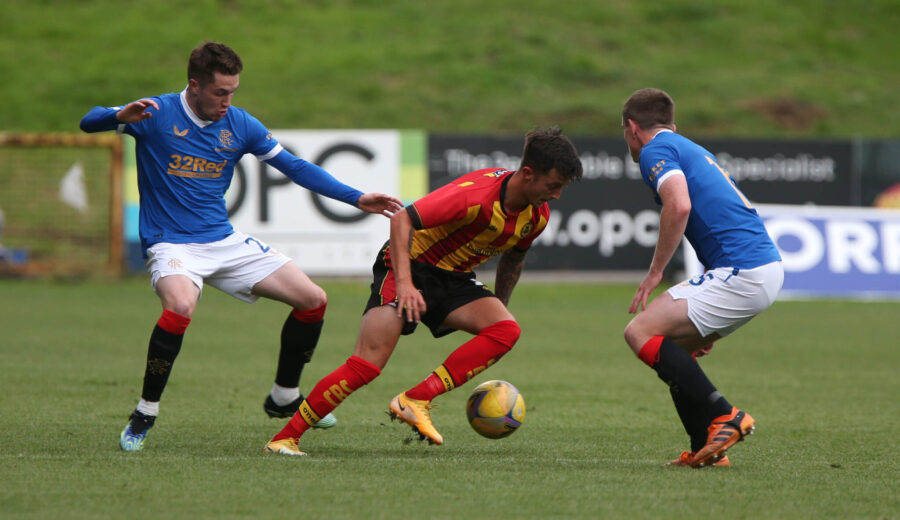 Partick Thistle wrapped up their 2021/22 pre-season fixtures as they welcomed Rangers to Maryhill on an overcast Monday night. The Jags had a particular reason to be excited about the clash with Thistle fans being allowed back inside Firhill for the first time in over 15 months.

Wins over Kelty Hearts and East Kilbride got the team started in pre-season but now with the champions of Scotland visiting Ian McCall was buoyed by the return of two players who missed those games; Stuart Bannigan and Scott Tiffoney.

It was Tiffoney who mustered up the first real shot on goal of the game as he cut in from the left flank to fire goalwards but his effort flew high and wide of the goal.

Rangers carved out their first opening of the game when Ross Docherty’s slip in the Jags half allowed Glenn Middleton to feed Jermaine Defoe. The former Spurs striker tried to slot the ball low past Jamie Sneddon but the Thistle ‘stopper stood strong and blocked the shot.

Shortly thereafter there was action in the Rangers box as a swift Thistle counterattack led to a chance for Brian Graham. Connor Murray picked the ball up around the halfway line and drove forward before passing to Ross Docherty in the Gers’ area. The hosts’ skipper laid it to ex-Rangers man Richard Foster who lofted a cross towards Brian Graham. Graham was able to climb above his marker but his header was excellently tipped over the bar by Robby McCrorie.

The away side had another opportunity to go ahead after 26 minutes when Jordan Jones put one on a platter for Glenn Middleton, however, the wideman’s shot was scuffed and went well wide.

The final chance of the first chance fell to the home side with Richard Foster and Brian Graham linking up once again. Stuart Bannigan got the ball to Foster on the right flank and the number two sent another delivery towards the middle of the box where Graham was lurking. The number nine had found a bit of space between defenders, however, his header skipped a yard or two wide of the target.

Steven Gerrard made a myriad of changes at half-time and it seemed to reenergise the visiting Gers. Four minutes after the restart Sneddon was forced into another save as Cedric Itten took aim from 15 yards. The Jags custodian had to be down sharply to turn away the Basel native’s low drive before Kevin Holt collected the rebound and cleared.

Another of the half-time changes was causing problems when Kemar Roofe struck the post in the 75th minute. Joe Aribo picked out the number 25 with a pass into the box and when no pressure came, Roofe shot for goal. He tried to pick out the bottom left corner of Jamie Sneddon’s goal but could only find the outside of the post.

The visitors were handed their best chance of opening the scoring with eight minutes to play when the referee awarded a penalty for what he saw as a handball by Richard Foster from a James Tavernier free kick. It was Tavernier himself who stepped up to take the spot kick but he saw his right-footed attempt ricochet back off the post with the help of a fingertip touch from Jamie Sneddon.

The Thistle resolve was eventually broken a couple of minutes later as Cedric Itten put Rangers in front. A high cross to the back post was cleverly knocked down by Ianis Hagi and Itten was first to it, knocking the ball home to make it 1-0.

That’s how things ended as the Jags completed their pre-season fixtures. Now, it’s all eyes on Saturday when Thistle take on Dunfermline in their first competitive game of the season.