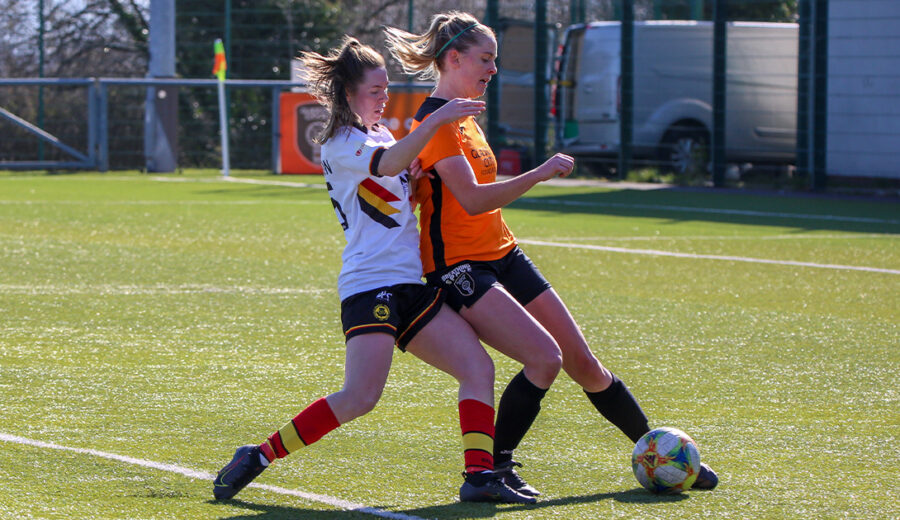 For once the sun was shining bright over Petershill Park and there was a brightness too to the Thistle performance but sadly no reward in terms of points for Thistle after a performance that saw them go toe to toe with their more illustrious opponents.

With a demanding schedule ahead, the Thistle coaching staff elected to make full use of their squad underlining a pleasing level of depth to the current playing pool and those stepping into the side did their case for a regular starting position no harm at all.

Inevitably against the current league leaders, Thistle were required to defend for periods of the game but this was no backs to the wall performance trying to keep the score down.

In these games though it is important not to fall behind early and Thistle were adept at limiting the opportunities that came the way of Glasgow City in the game’s opening exchanges. Lauren Grant was required to save from Chinchilla after 12 minutes but it was a fairly routine save.

Indeed it was her opposite number, Alexander that was more seriously tested a minute later.

Fisher and Donaldson had already nearly linked up to telling effect when Fisher was able to win possession of the ball before finding Donaldson to her left and Alexander had to turn her shot round the post for a Thistle corner.

There was an escape for Thistle after 15 minutes when Dodds was unable to convert a great chance at the back post but Thistle were contributing much in a positive sense to a game that was providing good entertainment for the Petershill crowd.

The quality of Thistle’s defending was such that set pieces looked to be City’s best route to an opening goal. Lauder had already lifted one free kick over the Thistle crossbar from almost right on the edge of the box when she was presented with another opportunity from a similar position on the half hour mark. This time she made no mistake finding the bottom corner of the net.

Thistle were quick into the attack to try and provide a shift response and Alexander had to come out of her box to clear a McCulloch pass ahead of Taylor but it was that Lauder free kick that separated the teams at the interval.

City made a fast start to the second half and they were close to doubling their lead inside the first minute of the half and would have done so had it not been for a fantastic save from Grant who kept out Fulutudilu’s effort with an instinctive save with her feet.

Grant was in action again saving from Lauder and was well placed to save a Shine free kick as Glasgow City stepped up the pressure on the Thistle goal.

It was Thistle though that had the ball in the net after 54 minutes. Clare Docherty had not long been introduced as a substitute when she flicked on a Falconer free kick for Cheryl McCulloch to apply the finish but Thistle celebrations were cut short by the raised flag and an offside decision.

It was a pivotal moment in the game as in next to no time City doubled their lead. Fulutudilu was able to cross for Davidson who tucked the ball home from 7 yards out.

Grant had to produce a smart save when Davidson was baring down on her goal after 74 minutes but if anyone thought that the second City goal would open the floodgates then they were to be disappointed.

A Docherty cross was cleared for a corner after she collected a Fleming knock on inside the box and a Rigden corner was just a shade too high for McCulloch at the back post as Thistle pressed to find a route back into the game.

A long Slater pass found Anderson inside the City box but the ball just wouldn’t stick at her feet as time started to run out on a brave Thistle side. It was a win that Glasgow City fully merited but they will have had more comfortable afternoons.