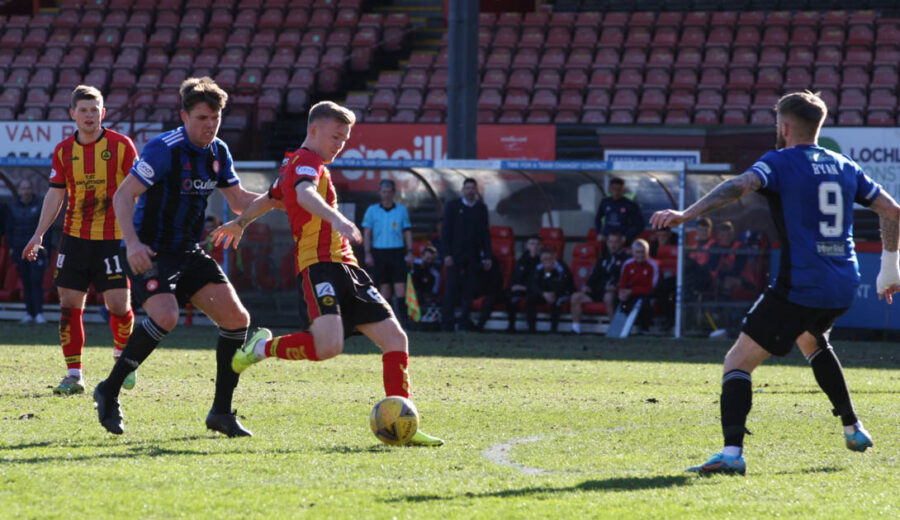 Hamilton came to Firhill for the second time this season as Partick Thistle looked to bounce back from a late defeat at Cappielow last weekend.

The Jags had taken seven points from three games against Accies so far this season with the most recent meeting ending 2-2 at the Fountain of Youth Stadium.

Ian McCall’s squad was depleted ahead of the clash and as such the Thistle manager had to make a three enforced alterations to the previous week’s XI. Brian Graham, Richard Foster and Alex Jakubiak all dropped out with the Jakubiak picking up an injury in the warm-up having been named in the starting line-up. Juan Alegria was the number 10’s late replacement while Tunji Akinola and Robbie Crawford stepped in for the other two absentees.

Thistle started the game poorly as the away side put them under a good amount of early pressure. Just three minutes in Hamilton had their first shot on goal as Andy Ryan was his effort from 20 yards saved easily by Jamie Sneddon.

That pattern continued as the game moved on with several shots coming in from just outside the Thistle box, though for the time being the hosts were able to get blocks in just in time.

The resolve wouldn’t last long, however, and Accies took the lead in the 19th minute through a fairly strange goal. Tunji Akinola played the ball back to Jamie Sneddon and the Thistle goalkeeper’s attempted kick up the pitch was blocked by David Moyo sending it high into the air. Sneddon couldn’t collect the ball as it dropped from the sunny sky in Maryhill and Moyo was sharply onto it. He then cleverly rolled it across goal for Andy Ryan who completed the job by tapping home into an empty net.

After the opener, the home side seemed to be moving in the right direction with a bit more possession in the Accies half but that didn’t translate into many chances with the best sight of goal coming after 37 minutes when Kyle Turner fired well over the bar from just outside the box.

In the end, Thistle offensive inactivity would be punished when Hamilton struck again on the stroke of half-time. A poor Sneddon clearance was sent back Thistle way and landed at the feet of David Moyo. The Zimbabwean went one-on-one with Tunji Akinola and, after a quick shift to his left, fired a low shot across goal into the bottom corner to make it 2-0 and two goals against the Maryhill men this season; this one a bit more meaningful than the other.

Having ended the first half with a goal, the visitors almost started the second period the same way. The Jags gave the ball away barely 30 seconds after the restart and Kieran MacDonald was able to rush down the left flank as a consequence. He fizzed a low cross into the front post area where David Moyo met it but, thankfully for Thistle, he flicked it over the crossbar.

The third goal of the game wasn’t far away though and in the 50th minute Accies got it. It was Kieran MacDonald corner which led to the goal with a well-placed ball to the back post being nodded back into the danger area by Mihai Popescu where it was met by Andy Ryan. The former Dunfermline man struck it on the bounce with his left foot and managed to find a gap between the mass of bodies in the goalmouth to put his team three to the good.

Things then went from bad to worse for the Jags as Hamilton made it four in the 63rd minute as they began to really enjoy their afternoon. Moyo was involved again with his lifted ball towards Andrew Winter not dealt with properly by Steven Bell as he tried to head it back to Jamie Sneddon. That allowed Winter to race onto it and lob the ball over the goalkeeper.

With the game well and truly over just after the hour mark, it made for a lowkey end to the match. The only real moment of note being Ben Stanway replacing Cammy Smith with 20 minutes to go as the Thistle Weir Youth Academy graduate made his league debut for the club.

The game finished 4-0 with Hamilton beating Thistle for the first time this season and Thistle suffering a second consecutive defeat in the cinch Championship. They’ll look to bounce back in midweek as they travel to face Dunfermline at East End Park. That game is a 7:05pm kick-off and will be broadcast on BBC Scotland.