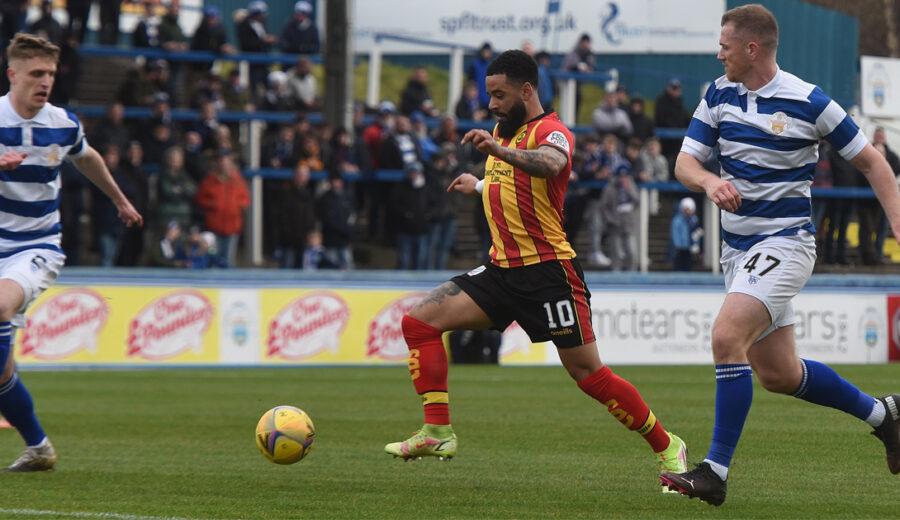 Thistle were looking for a bit of retribution as they made the trip to Cappielow to face Greenock Morton for the final time this season. Dougie Imrie’s side became the only team to have beaten the Jags in the league since the New Year when they won 1-0 at Firhill in February and now the Maryhill men were hoping to get one over the Inverclyde side to make it three wins on the trot.

Ian McCall made three changes to the first XI from the previous game against Queen of the South with Brian Graham, Kyle Turner and Cammy Smith all recalled to the starting line-up.

The Maryhill men looked bright in the opening stages and threatened the Morton goal just two minutes in. The ball was worked over to Alex Jakubiak at the right corner of the box and the forward nutmegged his man before unleashing a venomous shot with his right-foot. The power behind the shot would have made it difficult for Jack Hamilton to deal with but unfortunately it rose over the bar, flying into the Wee Dublin End.

The travelling Jags didn’t have to wake much longer for a breakthrough though as they got the scoring started in the fourth minute. A throw-in to the feet of Brian Graham from the left sideline allowed the striker to lay the ball off for Jakubiak and the on-loan Dundee man worked his way to the byline before playing the ball across the face of goal. He picked out Kyle Turner who was able to bundle the ball into the net before wheeling off to celebrate his second goal of the season.

A loose Lewis Mayo pass almost gave the home side an immediate route back into the game as Jamie Brandon latched onto it and played Gavin Reilly into the box. The former St. Mirren man tried a low shot across goal but Jamie Sneddon was able to fall on top of the effort after a deflection had taken the sting out of it.

The Ton had another opportunity to level things after 13 minutes as one of Lewis Strapp’s patented long throws caused havoc for the Jags. Strapp heaved the ball into the middle of the Thistle box and Alan Lithgow rose to meet it despite Jamie Sneddon coming to punch it. Lithgow headed it past the goalkeeper but over the bar as Thistle got away with one.

Coming out for the second half, the momentum seemed to be with the home side as they continued their push for an equaliser. Ten minutes after the break Iain Wilson lifted an in-swinging cross into the Thistle box from the left wing but Gavin Reilly’s tame header made for a comfortable save in the centre of Jamie Sneddon’s goal.

Another headed chance came the hosts’ way just after the hour mark as Gozie Ugwu flicked a Lewis Strapp corner towards the far bottom corner of the goal, however, the striker’s effort drifted wide of the post.

Then, in the 67th minute of the game, Morton missed their biggest chance yet. A corner into the Thistle box was sliced into the air by Kevin Holt forcing Jamie Sneddon to punch the ball under his own crossbar as the bodies gathered around him. That punch fell straight to Alan Lithgow who headed the ball off Holt, seeing the ball fall to Gavin Reilly. The number 14 swung a leg at what looked like a simple finish, however, he skewed the shot wide of the goal.

With 18 minutes left to play the away side had a rare second half sight of goal which could have sealed the win for them. Lewis Mayo met a Kyle Turner corner kick, directing his attempt towards the bottom left corner but Jack Hamilton was equal to it pushing it wide towards Kevin Holt who also saw a shot saved by Hamilton.

That proved to be an important save for Dougie Imrie’s team as they found their leveller in the 75ht minute. A long ball forward was missed by all the Thistle defenders allowing Lewis McGrattan to break through on goal. Jamie Sneddon stood up to the substitute and saved his initial effort but the ball fell back to the number 17 who squared it for Gavin Reilly to slam home.

There was almost a rapid repartee from Ian McCall’s men as Juan Alegria picked up the ball in the midfield and fed it wide to Stephen Hendrie. The number 33 took one touch before driving a low cross towards the front post area where Alegria was waiting, however, the on-loan Rangers man couldn’t hit the target with a first-time shot.

Morton were able to complete the turnaround in the 86th minute as a former Jag struck the lethal blow for the hosts. The goal came from an Oisin McEntee ball over the top which found Gozie Ugwu in the Jags’ box. He then reversed a low ball back into the centre where he found Robbie Muirhead. The number 9 took one touch to set himself before firing low across goal into the bottom corner of Jamie Sneddon’s goal.

The Jags couldn’t find a way back into the game in the remaining minutes and as such fell to their second league defeat of 2022 and their first away league defeat since October. The result leaves Thistle eight points off the league leaders Kilmarnock with a game in hand.