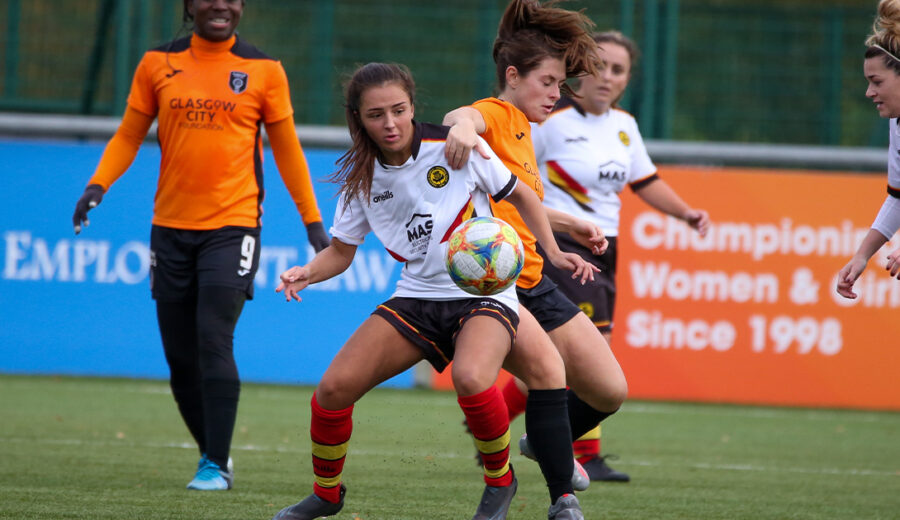 Thistle’s interest in the SWPL Cup came to an end at the quarter-final stage when they went down to defeat against Glasgow City.

Although Thistle could take heart and confidence from a brave display against the same opponents in the league earlier in the season, this was always going to be an extremely difficult challenge for them, and so it proved.

Any prospect of Thistle creating a cup shock weren’t helped any by the non-availability of a dozen players leaving manager Brian Graham with extremely limited options in terms of team selection.

The Thistle manager would have been desperate to avoid the loss of an early goal, but Glasgow City were able to open the scoring in just the fifth minute.

The home side had already threatened after barely 60 seconds with a Lauder header that Danica Dalziel, continuing in goal in the absence of Thistle’s two regular goalkeepers, saved with comfort.

The stand-in keeper though was picking the ball out of the net just a few minutes later.

A cross came over from the Glasgow City left and there was enough of a nudge from Cheryl McCulloch on Fulutudilu to give the home side a penalty that Davidson tucked away.

Ten minutes later and the same player doubled the Glasgow City advantage with Davidson again scoring what would prove to be the pick of the five Glasgow City goals. Davidson cut in the from the left and from the corner of the box fired high into the back of the Thistle net.

That was the end of the scoring for the first half with Thistle although under near constant pressure managing to limit the number of clear-cut opportunities that Glasgow City had with some resolute defending.

When Glasgow City did get a clear look at goal, they found Dalziel difficult to beat with one double save from Dodds of particular note.

The second half followed a very similar pattern to that of the first and, again like the first half, Glasgow City scored an early goal from the penalty spot. Michie was player to be fouled this time and Davidson duly completed her hat-trick sending the ball to Dalziel’s right.

Thistle did try and play more of the game inside the Glasgow City half and Cara McBrearty and Clare Docherty were able to link up well in one attack, but Clachers was swiftly off her line to snuff out any danger to her goal.

There was an even better chance for Thistle after 67 minutes.

After some tenacious player from Summer Christie in and around the Glasgow City box, the ball spun into the path of Eleanor Smith, but she snatched a little of the opportunity and sent her shot wide.

The bulk of the action though continued to come in front of the Thistle goal and on more than one occasion Thistle were thankful for the intervention of Dalziel in keeping the score down. A save to deny Fulutudilu probably the pick of the bunch.

She did, however, have to admit defeat in the 79th minute when Colvill netted and even then, Dalziel will feel unfortunate not to have kept the ball out when she managed to get a hand to Colvill’s shot.

There were some tired Thistle legs at this point and with 7 minutes remaining Glasgow City collected a fifth goal, Colvill grabbing her second goal of the afternoon with a powerful finish.

Although that signalled the end of the scoring there was still time for Dalziel to make one more impressive save when she kept out a Kats effort.