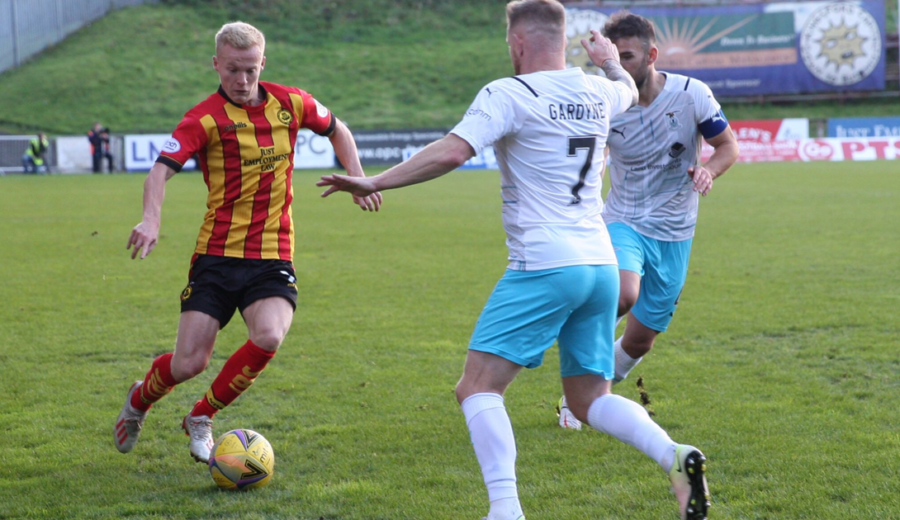 Off the back of consecutive scoreless draws against Dunfermline Athletic and Greenock Morton, Partick Thistle welcomed second placed Inverness to Maryhill for more cinch Championship action.

Ian McCall only made one change to the team that started the midweek stalemate against Morton with Cammy Smith recalled to the side on the right-hand side of the midfield at the expense of Kyle Turner, who dropped back to the bench.

The hosts started the game promisingly with Zak Rudden latching onto a Stuart Bannigan ball in behind the Caley defence less than a minute into the contest. Rudden managed to get a bit of separation from Kirk Broadfoot but couldn’t get his left-footed shot on target, shooting wide of the near post.

The promising start continued for the Firhill side when Cammy Smith nearly doubled his tally for the season in the 7th minute. Once again Rudden was involved as he held the ball up out wide before slipping a ball through to Smith who had made an infield run towards the box. He took the shot on first time trying to catch Mark Ridgers out at his near post but saw his effort saved well by the former Thistle ‘keeper.

Following that good chance, the Jags could have easily found themselves behind moments later. The resulting corner from Smith’s saved shot quickly turned into a counter-attack for Inverness. After the initial set piece was cleared, Michael Gardyne and Aaron Doran played the ball between each other before the latter lifted a pass over to Tom Walsh on the right flank. Walsh got away from the covering Scott Tiffoney before cutting past Tunji Akinola and trying to pick out the far corner. Fortunately for the Jags, Walsh’s shot rebounded off the post and was cleared for a corner.

A selection of half-chances followed with Ross Docherty having a shot from 20 yards deflected over the bar and Brian Graham seeing a glancing header fly well wide of target. Walsh was on the prowl again just after the half-hour mark as he tried a difficult volley from a Sean Welsh cross. The midfielder met the ball well but Jamie Sneddon saw it all the way and gathered comfortably.

The Caley Jags were then denied by the woodwork for a second time on 36 minutes as Michael Gardyne went close. The experienced wideman was played the ball by Scott Allardice before turning away from Tunji Akinola and trying to blast the ball into the net. His high shot looked net-bound but ricocheted back off the crossbar, falling to Billy McKay in the six-yard box. The former Ross County striker tried to head home into the waiting net but saw his attempt blocked by Richard Foster.

The next big flashpoint in the match came just before the hour mark as Inverness were awarded a penalty. A long ball forward was allowed to bounce in the Thistle box and as Aaron Doran snuck in behind Lewis Mayo, the two collided sending Doran to the ground and prompting the referee to point to the spot.

Former Thistle midfielder Sean Welsh stepped up to take the spot kick but Jamie Sneddon produced some heroics to get down to his right and save the penalty before collecting the loose ball. Moments later he was needed again as Aaron Doran tried to lob the ball into the net from 35 yards but he was able to tip the ball over the bar, preserving his clean sheet.

The final big opening of the game fell in the 89th minute as the away side almost grabbed a winner. Billy McKay got on the end of a chipped ball towards the by-line and played a cut-back towards Caley substitute Lewis Jamieson. Jamieson got his foot to the ball first but could only lift the ball high and wide of the goal as one last chance to win the three points went begging for Inverness.

So that’s how it finished as the two sides battled to a 0-0 draw with Jamie Sneddon the hero for Thistle. It meant a third straight 0-0 draw for the Jags as they maintained fifth position in the Championship.