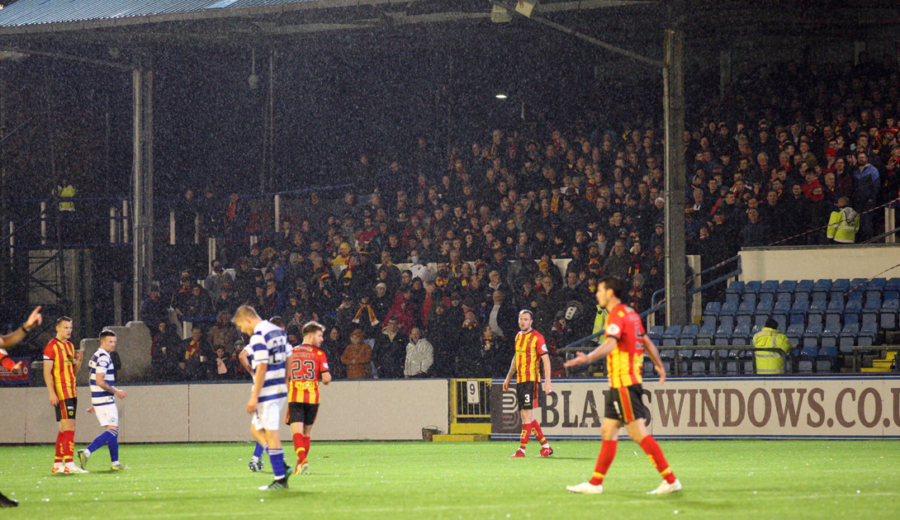 Partick Thistle looked to get back to winning ways following a goalless draw against Dunfermline as they travelled to Cappielow to face Greenock Morton in their first midweek fixture of the league season.

Ian McCall made one change to the side which started against the Pars with Kyle Turner replacing Cammy Smith on the right-hand side of the midfield.

It was almost a lightning-fast start for the Jags as Lewis Mayo stepped forward to win a header from Jack Hamilton’s goal kick. The ball bounced to Brian Graham who cleverly flicked it over the Morton defence for Zak Rudden to run onto. The striker tried to slot the ball past Hamilton but the ex-Hearts ‘keeper got down well to make the save before Scott Tiffoney fired the rebound over the bar.

Zak Rudden found himself in a good position to score once again after 16 minutes. A quick Jamie Sneddon throw got Kyle Turner moving down the right flank with Rudden making a run in the centre of the box. Turner picked out the number 10 who controlled and tried to slot home but was once again denied by Hamilton though the assistant referee’s flag was raised in any case.

Thistle threatened from wide on the right once again on the half-hour mark. Ross Docherty fed the ball to the onrushing Richard Foster who then picked out Brian Graham with a cross which found the striker at least 16 yards from goal. Graham attempted a first-time header but saw his attempt fly a yard or so wide of the near post.

The home side created their first serious opening of the match with ten minutes to go until half-time. Cameron Blues received the ball down as he made a bursting run into the Thistle box on the Morton right, proceeding to drill the ball towards the front post area. Gary Oliver was making a good run across the six-yard box and got to the ball first, however, under pressure from Tunji Akinola he was unable to direct a shot on target.

Morton continued to grow into things as the game moved deep into the second half and they were inches away from an opener in the 69th minute. A corner, which was initially punched by Jamie Sneddon, was kept alive by the Ton and moved over to the right wing where Jaakko Oksanen had found some space just inside the Thistle box. He drilled a low ball towards the goalmouth area where Gavin Reilly was making a run but the former St. Mirren attacker couldn’t quite get a foot to the ball and it slid away for a goal kick.

The visiting Jags’ best opportunity of the second period came about 10 minutes later for Scott Tiffoney. The ball dropped to the winger from a corner via a Lewis Mayo flick on and Tiffoney did well to settle the ball with his first touch. The number seven then took aim with his right-foot but just as he did in the opening couple of minutes, he cleared the bar with his shot.

There was almost a dramatic late winner for the hosts as Alan Lithgow went close in injury time. A corner from in front of the away fans was missed by everyone and found its way to Lithgow at the far post. Like Tiffoney, he produced a useful first touch to set himself for the shot, however, he kept his effort down and Jamie Sneddon was needed to keep the ball out and secure the point Thistle.