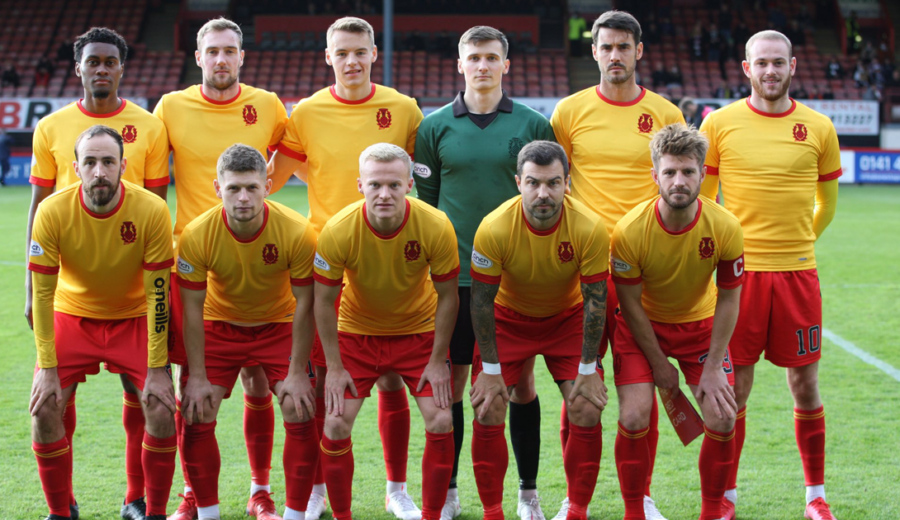 Partick Thistle were back at Firhill this afternoon as they looked to make it three league wins in a row, against Dunfermline Athletic.

A 4-0 win over Ayr followed by a 6-1 victory over Hamilton Accies had propelled the Jags back into the top four and Ian McCall’s side were now looking to solidify their spot in the play-offs against  Peter Grant’s struggling Pars. The Fife side came into the game winless in their nine Championship games this season though they had managed draws in four of their last five.

Despite coming into the game off the back of a 6-1 win, Thistle’s start to the game was markedly tepid. It took 19 minutes for the Firhill side to carve out any sort of real opportunity as the visitors looked to sit in and contain them.

That first chance came through Scott Tiffoney as the winger picked the ball up on the left wing and drove infield. He evaded a couple of challenges before eventually unleashing a right-footed shot from 20 yards. His shot was on target but came at a good height for Dunfermline goalkeeper Owain Fon Williams who batted it away.

Thistle were close again in the 23rd minute as the Richard Foster to Brian Graham connection almost produced another goal. The ball was moved out to Foster on the right flank before the right-back swung it into the goalmouth area. Graham was stretching to get on the end of the delivery but couldn’t quite reach the ball to tap it home from close range and it carried through for a goalkick.

Coming out for the second half, the Maryhill men were on the front foot and very well could have been in front with 53 minutes on the clock. The ball came to Ross Docherty 25 yards out and the Thistle skipper brought it down excellently before lifting past his marker. He then managed to dig out a shot which was headed for the top corner before Fon Williams touched it over the crossbar.

The Pars finally came into the game around about the hour mark and Craig Wighton wasn’t far away from the deadlock breaking goal 58 minutes in. Kevin Holt stepped out from defence to make a good tackle five yards outside the Thistle box but, unfortunately for the number three, the ball fell straight to Wighton who quickly fired for goal. His effort was bending towards the top corner but narrowly went past the post.

Jamie Sneddon was called into serious action for the first time of the afternoon with 23 minutes left as Wighton threatened once again. The Pars’ number nine was able to nip in front of Tunji Akinola as the Thistle defender dallied on the ball in the box. Wighton then tried to apply the finish from relatively close range but Sneddon was out sharply to close down the angle and make the save with his body.

Ian McCall made some changes as the game drew closer to a finish and his side regained control of the ball as they pushed for a winner. Probably the best chance of the closing stages was when Scott Tiffoney lifted a ball over the top for substitute Jake Hastie but the Rangers loanee couldn’t control the ball and it skipped through to Owain Fon Williams.

With that, the game finished goalless and Thistle’s run of 11 league games without a draw ended. The point was enough for the Jags to maintain fourth place ahead of a midweek trip to face Greenock Morton at Cappielow. That game is a 7:30pm kick-off against the Ton.