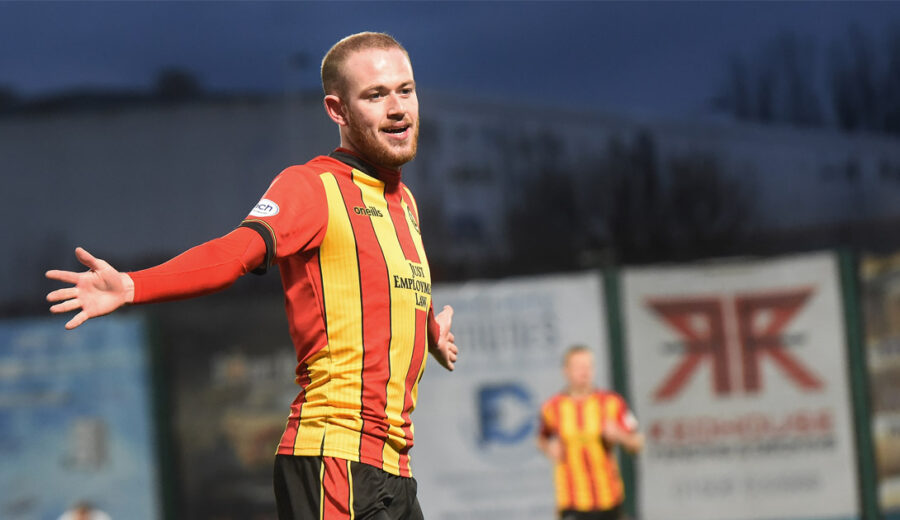 The games began in 2022 for Partick Thistle as they took on Hamilton at the Fountain of Youth Stadium where they were 6-1 victors earlier in the season.

However, a much-improved Hamilton side came into the game off the back of three wins in five league games including an impressive 3-0 win against Queen of the South at Palmerston Park.

Ian McCall made two changes to the side which had beaten Raith Rovers in the Jags’ last game with a debut for January signing Robbie Crawford in place of the absent Stuart Bannigan. Match-winner from that game against Raith Kyle Turner also came into the side as Cammy Smith dropped to the bench.

Hamilton started the better of the two sides rather unsurprisingly as Thistle settled into their first game in three weeks following a chain of call-offs over the festive period. Nevertheless, the best effort on goal Accies managed in the opening stages was a 25-yarder from Miko Virtanen which Jamie Sneddon safely caught.

The match continued in a stop-start manner with lots of fouls stopping any chance of a tempo developing. Again, long-range efforts provided the only excitement with Jamie Hamilton firing high and wide from well outside the box after 24 minutes.

It was a half of football which probably didn’t deserve a goal, however, it got one right on the stroke of half-time. Ross Docherty was fouled at the edge of the Hamilton box and Scott Tiffoney stepped up to take the set piece. The number seven rifled a low effort into the bottom corner on the goalkeeper’s side to get his fourth of the season and put Thistle into the lead at the break.

It didn’t take long at the start of the second half for Accies to respond though. The Jags gave the ball away near their own penalty area and Lewis Smith carried the ball into the box. He was confronted by Lewis Mayo who tried to get a toe to the ball as Smith headed for the by-line but Mayo’s only got the man and Willie Collum pointed to the spot. Andy Ryan took the penalty and despite Jamie Sneddon getting a hand to it, the former Dunfermline striker found the net to bring the hosts level.

The away side almost produced a quick reaction of their own as Scott Tiffoney set up Brian Graham for a chance after racing away from Jamie Hamilton, however, Graham couldn’t hit the target with a first-time finish.

Despite that, Thistle didn’t have to wait much longer for another go-ahead goal and it was Zak Rudden who got it. It all came from a Richard Foster interception as he won the ball high up the pitch before laying it on to Kyle Turner on the right flank. Turner then floated it to the back post where Brian Graham was able to knock it down to Zak Rudden for an easy tap-in.

Once again though, Hamilton weren’t wilting and they struck back just three minutes later in the 66th minute. Thistle didn’t clear the ball properly from a Reegan Mimnaugh corner and that led to another cross coming in from the opposite side of the box. The second delivery found Mihai Popescu who contorted his body to force a shot goalwards which neither Brian Graham nor Jamie Sneddon could keep out on the line.

With points so valuable heading into the second half of the season neither team was settling for just one. Accies almost went ahead with 11 minutes to play as Reegan Mimnaugh found Jamie Hamilton with a corner but the number 6’s effort crashed back off the crossbar before being cleared.

The Jags got a second win as the game entered the final five minutes and there was a flurry if chances for Ian McCall’s side to take the win. Firstly, Scott Tiffoney cut in from the right and had a pop at goal which was deflected behind by Matthew Shiels.

From the resulting corner Thistle could hardly have been any closer. A Kyle Turner corner to the back post reached Kevin Holt and the defender met the ball well to send it towards goal. The ‘keeper was beaten but, fortunately for the home side, there was a defender on the post to block the attempt before Joe Hilton gathered.

There was one last scare for Accies as the ball made it’s way to Cammy Smith in the second phase of a corner. The number 11 tried a low shot which took a deflection and trickled just wide of goal.

So, the points were shared after all at the Fountain of Youth Stadium despite Thistle having led twice. Next up for the Maryhill men in the visit of Kilmarnock for some Friday night football at 7:45pm on 14th January.