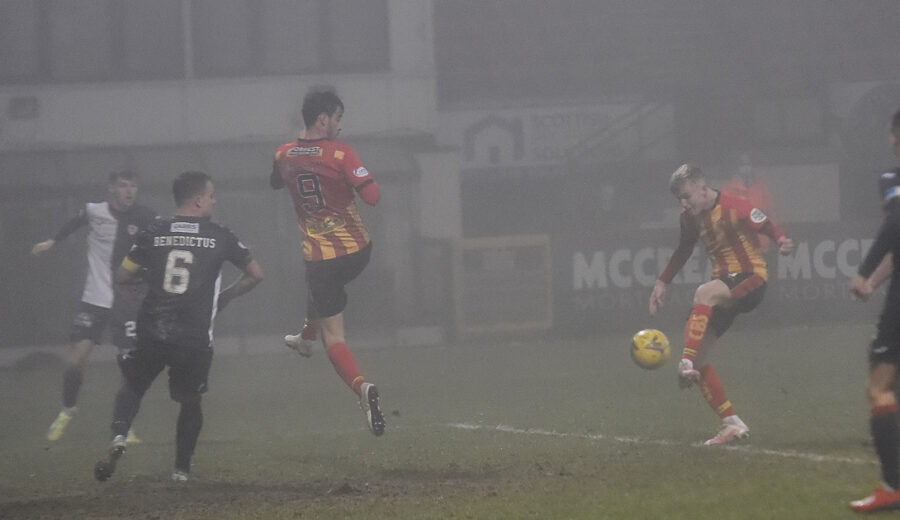 Partick Thistle looked to bounce back from their unbeaten run having been ended by Arbroath as Raith Rovers came to Maryhill looking to extend an unbeaten run of their own. John McGlynn’s side arrived in Glasgow without defeat in their last 15 games, a run which began with a 3-2 win over Thistle at the end of September.

Ian McCall made just one change to the side which lost 2-0 to Arbroath with Zak Rudden back from injury to take the place of Kyle Turner in the starting line-up Cammy Smith, who came off injured against the Red Lichties, was fit enough to start on the right hand side of the Jags’ midfield.

Thistle were on the front foot from the off on a foggy afternoon at Firhill and had a good chance to go in front within the first minute or so. A Tunji Akinola free-kick from the half-way line was flicked on by Ross Docherty towards Scott Tiffoney. The ball dropped right in front of the unmarked winger but as he looked to apply the finish, he miskicked the ball and saw it bounce wide of target.

Playing without a recognised striker due to a number of absences, Raith were limited in terms of attacking moments with their best chance of the opening stages coming from an Aidan Connolly free-kick. The ex-Dundee United man took aim from 30 yards out but his effort skipped comfortably wide of Jamie Sneddon’s left-hand post.

Thistle continued to look the more likely to score as the half went on and Scott Tiffoney went close once again in the 22nd minute. In the second phase of a corner kick, Richard Foster played a lofted ball back towards the set piece taker Cammy Smith who in turn laid it off to Kevin Holt. The defender then curled a terrific ball into the Raith box which Tiffoney headed towards goal and that would have been the goal to break the deadlock had it not been for a strong hand from Rovers ‘keeper Jamie MacDonald who was able to tip it over the bar.

There was another golden opportunity for the Maryhill men to hit the front in the 25th minute as Cammy Smith was presented with a great chance to get his second goal for the club. A Ross Docherty chip into the box was met by Reghan Tumilty, though his clearance went straight to Smith. The former Aberdeen man controlled it well on his chest before trying to pick out the bottom corner with his left foot. The number 11 was slightly off-balance as he struck the ball and that had a telling effect on the finish as the ball flashed marginally wide of the upright and out for a goal kick.

There was a rare forage forward for the visitors 10 minutes into the second half. The ball was worked nicely from the left to the right where full-back Reghan Tumilty had taken up an advanced position. He cut infield before playing a reverse pass into the path of Aaron Arnott. The number 25 fizzed a ball across the six-yard box but saw his delivery fly all the way through the box and out for a throw-in.

Just four minutes later Raith’s hopes of winning the game, and potentially going top of the table, were dealt a serious blow as Christophe Berra was sent off. Ross Docherty played a free-kick into the Raith half which Berra miscontrolled, leading to a loose ball that he and Cammy Smith both went for. Smith got there first and Berra went slamming into the Thistle man with his leg raised above waist height. That was enough for referee Steven Kirkland to brandish the red card and reduce the away side to 10 men.

Thistle had been dominant through the first hour of the game and were even more so now that Raith were a man down. Within a minute of the dismissal they were creating chances again. The ball was played in from the right wing towards Zak Rudden, however, the striker couldn’t make good contact at the first or second attempt. It then ricocheted towards Cammy Smith but his low effort was blocked in the six-yard box by Rovers captain Kyle Benedictus.

What had been essentially one-way traffic in the first half was now a never-ending bombardment of the Raith box as Thistle launched attack after attack. Jamie MacDonald was required for a second time with 67 minutes on the clock as Brian Graham broke the offside line to get on the end of a Stuart Bannigan pass. The number nine pivoted before drilling a low ball across goal. It deflected the way of Kyle Turner and the substitute rifled a half-volley goalwards which MacDonald got two strong hands to, turning it away.

Turner had another opportunity to find the back of the net in the 87th minute courtesy of some fantastic wing play from Scott Tiffoney. The number seven sped away from two Raith defenders and rolled a low ball into the heart of the box. Turner ran onto it, eight yards from goal, but could only lift a left-footed shot over the bar as Thistle’s time seemed to be running out.

Thankfully for the Jags, however, it was a case of third time lucky for Kyle Turner as the midfielder netted his first competitive goal as a Jag in the 95th minute. Again, Tiffoney was the creator as he cut inside from the left this time and floated a cross towards the back post. There it found Ross MacIver who climbed above Liam Dick to head the ball back across goal where Turner met it with a well-controlled volley. The shot flew past Jamie MacDonald and into the back of the net to secure Thistle a massive three points.

The win moved the Jags up to fourth place and to within three points of the top of the table. Next up for Ian McCall’s side is a boxing day trip to face Inverness, one of the three teams above them in the league. That one is a 3pm kick-off at the Caledonian Stadium.